OK, so I'm Becca and this is my first ever blog post! I've been wanted to do this for a little while now, but I finally got the nerve to actually start it, ha ha. Anyhow, onto the baked goods!

My first post will be about Cinnamon Raisin Bagels. A few weeks a go I got this book called  1001 cupcakes, cookies & other tempting treats at Barns and Nobles, well i was really excited because on every page there was something that i wanted to bake and every recipe had an alternative recipe to it, which made it better! Well on page 63 there was a bagel recipe and my dad usually likes eating bagels in the morning and i saw on the alternative recipe box a way to make it a  cinnamon raisin bagel (which my dad loves). so on Friday I told him that I would make these bagels and then see if he likes them compared to the store bought ones. He hasn't tried it, but he said he would once he got back from golf this afternoon, and I'm really excited! i love it when people taste the things I bake even if I don't like one of the ingredients (I don't happen to like raisins...I don't think...and so I'll probably just eat around the raisins).


the first time I made the dough it turned out like this:

the second time I made the dough after a few adjustments :)

proofing in the oven because my house was freezing 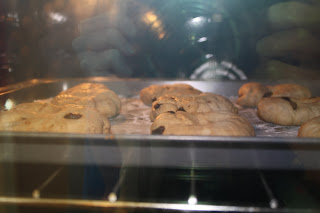 poaching in some simmering water 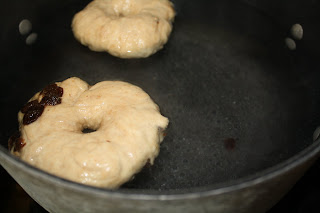 the final product! a little over done but that's OK with me :) 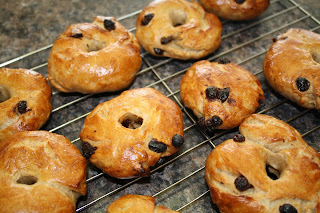 My own comments or variations will be in purple.

My own directions (because the first directions are confusing a kind of long):