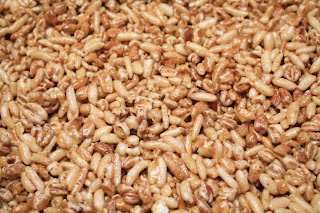 I can’t believe it’s already Fall! Autumn and Winter are my two favorite seasons. It’s something about the crunchy leaves, the crisp and cool air, and of course the awesome flavors and smells. I’ve noticed that any candle that pertains to Fall or Winter always have the best scents. I know that Autumn officially started on the 23rd of September, but I have this rule for myself, well…more like a feeling really, Fall does not start when the calendar says it starts. To me, Fall begins the first day of October. September is that limbo month to me, it doesn’t know what season it’s supposed to be in, so it stands in a corner watching all of the other months play in the sprinklers or fallen leaves. I have the same feeling with Winter; Winter starts on December 1st, not the 21st or whatever.


Because of my quirky season rule, I refuse to make anything with pumpkin before the first of October, so while other bloggers are posting pumpkin cream cheese muffins, pumpkin bars and pumpkin who knows what else, I am giving you this little crispie bar treat. 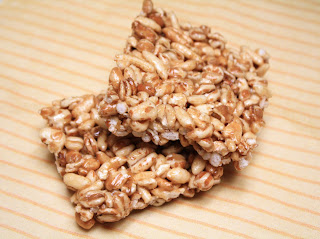 The entire thing takes just minutes to make and put into the pan. I do however, highly recommend keeping the bars, once cut, in the fridge, because as they sit out a room temperature, they start to fall apart, not that they don’t taste good that way either, it’s just something to point out if you want to have a bar and not a crumble. 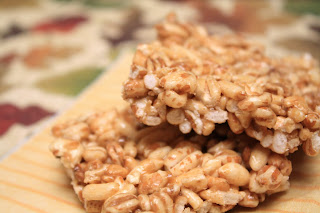