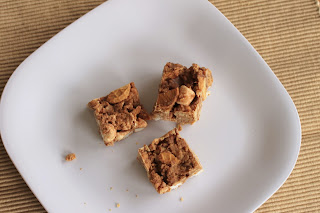 On Friday something happened that never happens: my school got a snow day. My school district is one of the meanest stubborn school districts in Colorado, I think. I think it was just this past December, but there was another huge snowstorm and pretty much all of Colorado schools shut down, except for just a few. My school district was one of them. I mean come on! Half the schools are in Boulder (where it got the most snow) and we still didn’t get a snow day. Something is seriously wrong there. But this time we did get a snow day (probably due to the fact that there would be a mutiny if we didn’t).

So what did I do with my snow day? Well after waking up at 5:15 am (like normal) and being told by my dad that he got a call at 4:30 am saying that school was closed, I couldn’t go back to sleep. So I read for about an hour, worked on some homework/notes, had a mini marathon of Lie To Me (totally addicting show that I wish hadn’t been canceled), and surfed around Foodgawker. 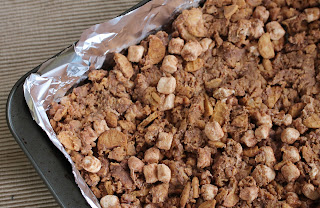 Most people talk about Pinterest being a time-sucker, but to me, it’s Foodgawker. That place is so addicting and the pictures make my mouth water. One of the amazing things I found was a recipe for fluffernutter bars by Bakers Royal.

In case you don’t know what a fluffernutter is: it’s a peanut butter and jelly sandwich, but in place of jelly, marshmallow fluff steps in. It is one seriously awesome sandwich!

This bar (which is a little more like fudge) is just like a fluffernutter, but with a little bit of chocolate added thanks to the Reese’s added to it. 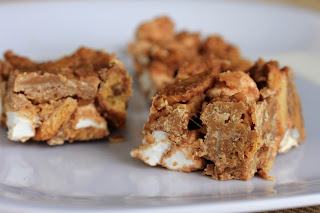 I will admit that I had some difficulty with the recipe. I had adapted the recipe (doubling most of the ingredients and slightly raising the amount of others) so that I would get enough to make a 9x13 amount instead of the 8x8 in the original. However, there seemed t be too much extras and not enough of the binder, which kinda frustrated me, but it all turned out find once I got the hang of folding all the ingredients together.

The end result was a mix of deliciousness. The fudge squares are crunchy from the nutter butters, yet chewy from the mini marshmallows, and creamy and chocolatey from the Reese’s and melted marshmallow and peanut butter chip mixture. It really is a nuttberbutter in a compact one inch square 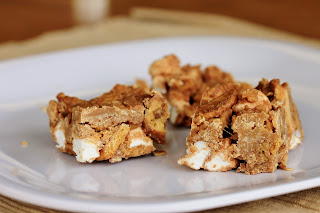