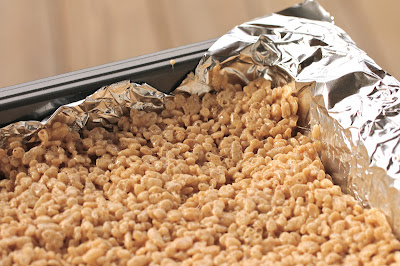 From October to December time seems to fly by so quickly. I looked at the calendar the other day and was shocked to find that half the month had already passed. Where did that first part of October go? I don’t know, but now I feel the pressure to get more things done.

Today, I’m sharing something very fun. I’m sharing cinnamon roll rice krispie treats. I have had the recipe saved on my computer for a while now, and when a pumpkin spice rice krispie recipe fell through the cracks I quickly came back to these as an alternative, and I’m very glad I did. 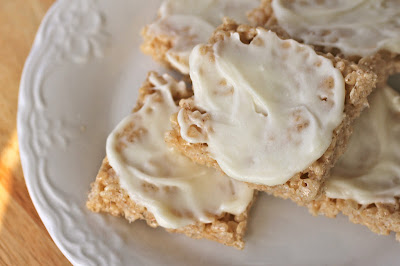 The rice krispie part is so pretty with the specks of cinnamon scattered throughout the treat. I was actually mesmerized when I added the cinnamon to the melted marshmallow in the pot . The component that really makes these like cinnamon rolls is the cream cheese frosting. It’s not too sweet, but it’s also not too cream cheesey either. I think frosting is slowly starting to make its way into my heart.

And thank you Brenda for hosting this year's 12 Weeks of Christmas Treats. This post marks 4 weeks into the celebration. 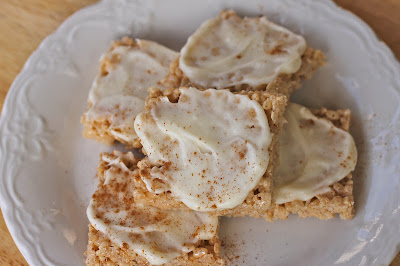 Melt butter in a large pot over medium heat. Toss in the salt and cinnamon and stir. Add in the mini marshmallows. Stir constantly until the marshmallows have melted completely. Take off the heat and stir in the vanilla. Add the cold cereal to the hot marshmallow mixture.

Pour the hot cereal and marshmallow mixture into the prepared pan. Spread the mixture evenly across the pan with a greased rubber spatula. Gently press down to compact the treats. Set the pan in the refrigerator to cool as you make the cream cheese frosting.

Directions
Beat the cream cheese and butter until well combined. Stir in the vanilla. Gently beat the powdered sugar in three stages so as not to make the sugar go flying.

Take the pan out of the fridge and cut into squares. Use a butter knife to spread the cream cheese frosting over the rice krispie treat. Sprinkle the tops with cinnamon if desired.