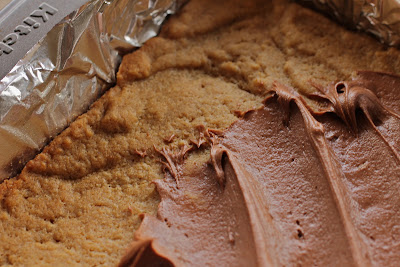 So… you know how I said I was so excited about finals coming up and going home? Well that nostalgia has worn off. I’m freaking out over calculus (I spent 3 ½ hour reviewing on Saturday and about 5 on Sunday!) and chemistry (something I haven’t even glanced at because of how much I’ve been reviewing calculus). College is stressful… and I know I’m not being cheery right now, and it’s sad because it’s finally December: the most amazing holiday month ever!

I go to Target for groceries and out of the hour I spent at target, about 25 minutes was spent actually grocery shopping. The other 35 minutes were spent skinning around the Christmas isle all giddy like. I have a sickness, but I don’t care. I love Christmas!

So I know I’m supposed to be making Christmassy things like gingerbread men, molasses cookies, sugar cookies, and all the like, but I just don’t have the time. I will be baking a lot during the winter break, so hopefully I’ll knock a bunch of stuff off my various baking lists. 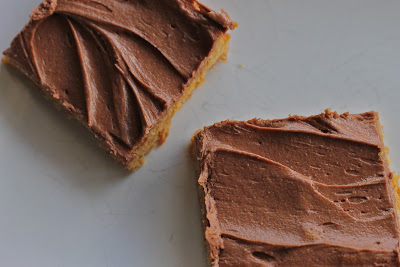 The whole apartment smelled like peanut butter as these were baking in the oven. It was simply heaven. And the milk chocolate frosting is so soft and not cloyingly sweet (something I’ve always had trouble with when making frosting). I actually think it could have used a little more milk chocolate flavor, but it was good nonetheless.

I cut the pan into sixteen portions and in less than 12 hours all but two and a half squares were gone. I might have over-baked them slightly though as they were not as chewy as I would have liked them to be. Other than that small detail, these were lovely.

So tell me, what are you guys making this holiday season? 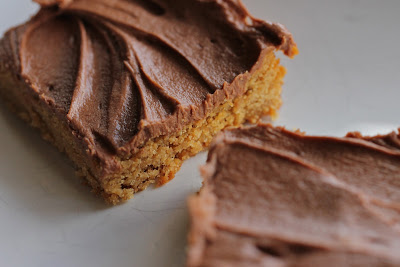 Directions
Preheat the oven to 325 F. Line a square baking pan with tin foil. Grease the foil with cooking spray; set aside.

In a medium bowl, whisk together the flour, baking powder, and salt, set aside. Melt the butter and sugar together in a medium saucepan over medium heat. Stir until butter and sugar have melted into each other. Stir in the peanut butter. Remove the pan from the heat and allow to cool for several minutes. Add the egg and vanilla and beat until well incorporated. Gently add in the flour, careful not to over mix it. Pour the batter into the prepared pan and spread. (My batter was pretty thick, but I had used the whisk melted butter and dry sugar method.)

Place the pan in the oven and bake for 18-20 minutes. Allow the blondies to cool completely before frosting.

To make the frosting: beat the butter in a medium bowl with an electric mixer on medium speed. Sift the cocoa powder, salt, and the powdered sugar into the bowl in small increments, you don’t want cocoa and sugar all over your floors. Add the milk, ½ tbsp. at a time. Pour the melted chocolate into the bowl and beat until fully incorporated. Frost the cooled blondies and cut into servings.
Posted by Unknown at 7:21 PM