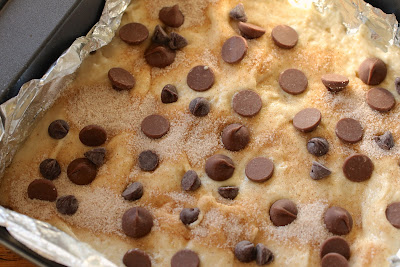 I have a new pan obsession. This pan may now be as exciting as some intricate bundt pans or whatnot. This pan is simple and makes me happy. It’s the 8 inch square pan. Yeah, I know; I told you this pan wasn’t exciting, but it is exciting to me. I have never owned an 8 inch square pan up until recently. I’ve always just had a 9 inch pan, which come to think of it, I think is a little bigger than 9 inches. Oh well, back to my simplistic little square pan. 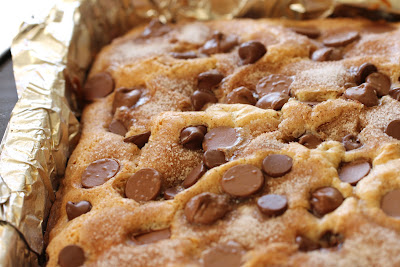 I have used this pan for about three recipes now (all involving cake) and I have never had a square cake come out so tall! Ohmygoodness, it’s so mesmerizing and just plain awesome! Yes, I get excited about the tallness of my cakes, and no, I don’t care if it seems silly. You should really see me in the kitchen; I sit by the oven and watch the thing ride like right up to the top of the pan and beyond. My 9 inch square pan doesn’t do that (I still love you little big-pan)

Ok, that’s enough of me fangirl-ing over a pan. I mentioned cake earlier, so lets talk cake!

I saw this cake over on Baked Bree a while ago I knew I had to make it. I mean its coffee cake with chocolate chips in it for goodness sake!!

The cake came out so pillowy soft. The exture is like a dream. First you get to bite into that crunchy cinnamon crust, and then you hit a pocket of melty chocolate chips. It really is a great feeling. I never knew chocolate and cinnamon sugar could play so well together. 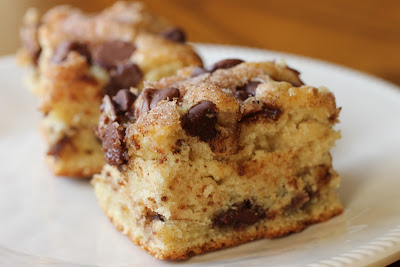 In a medium bowl, whisk together the flours (you can use all all-purpose flour if you wish, I’m just trying to get rid of some whole wheat stuff – you can’t taste the whole wheat, honest), baking powder, baking soda, and salt.

In a medium bowl, whisk together two egg whites until they reach stiff peaks. Set aside. In a large bowl, cream together the butter and sugar until light and fluffy. Scrape down the sides of the bowl as necessary. Add the egg yolk and vanilla extract. Beat until well incorporated. Add the flour mixture in three parts, alternating with the sour cream in two parts, starting and ending with the flour. Scrape down the sides of the bowl to make sure everything is well combined. Fold in the egg whites.

To make the middle and topping: whisk together the sugar and cinnamon in a small bowl.