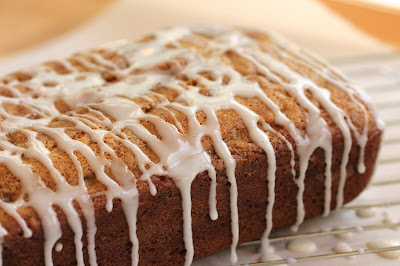 I have been so, so lazy lately. I know this because I haven’t been getting out of bed until 8 am every morning for the past month (which is by no means normal for me). Then I look a recipes and think of making things and then I get caught up in sitting in bed and doing absolutely nothing. I don’t like being lazy. I need to be doing something. So now I’m getting off my lazy butt and making delicious things for you to drool over (and possibly make yourselves –hinthint-)

Today I bring you something I have been meaning to make for such a long time now. I think I have written the recipe down on at least three different occasions, but never made it. This is something I really regret because this cake is so moist, so tender, and best of all, so cinnamony that you will scrunch down on your seat and do your little happy-wiggle dance (you know you have one). 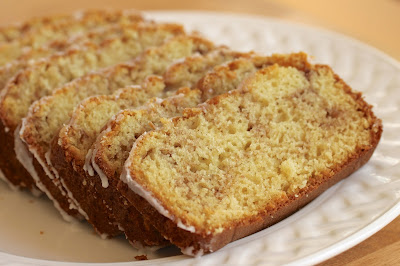 If you haven’t checked out Culinary Concoctions by Peabody, please do. And when you do try to pick your jaw up off the floor with as much dignity as you can. Her food is so rich, fattening, and scrumdidliumptious, just how desserts should look and taste. But if her food is not your style, just go for her words. I love every single post because of her words. Even if I don’t like the look of what she is sharing, I still read for her wit and wisdom.

So, back to this cake – Peabody calls it a bread but to me it has more qualities of a cake. This cake is very soft and has a beautiful swirl of cinnamon inside. I ate one slice plain and at room temperature. The cake was delicious, but I couldn’t really taste the cinnamon. Later that night I tried a slice heated in the microwave with a scoop of vanilla bean ice cream and WOW! That made all the difference. The cinnamon flavor was heightened about 100 times and the hot-cold combination of the cake and ice cream was out of this world. I really recommend eating a slice warmed up with a scoop of vanilla ice cream. 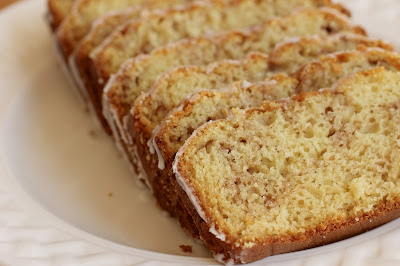 Bake for 40-45 minutes. Allow to cake to cool in the pan for about 30-45 minutes. Turn the cake out and allow to cool completely on a cooling rack. Once cake is completely cool, drizzle glaze over the top of the cake. Slice and serve.