Last Week I made this thing called the Cinnamon Pudding Cake from Cake Keeper Cakes for the Cake Slice Bakers November cake, and let me tell you, it was superfanfreakingtasicly-delicious! I will start with the “topping”. Well it was on top when I put it on before the cake went into the oven but it gradually sank down to the bottom (maybe it was supposed to do that?) as I baked, well either way it was delicious! Its creamy and thick and when there’s leftover topping, I make sure to lick my fork clean before I take another bite, it’s just that good. I don’t know any other way to describe this sticky delicious thing so I will move on to the cake (by the way I’m eating my second helping of it just so I can describe it accurately for you, I know, my job is tough). Well at first glance the cake looks sort of dry, but let me tell you, it’s not. This cake is really dense and soft. It’s one of those cakes where you actually have to give a little push to get to the bottom on the slice (and I mean that in the best way possible not the, oh my god this cake is too hard kind of way. It has this great cinnamony flavor and it is just pure heaven on earth. I know some of the Cake Slice members had difficulty with this cake, they said they had to add more butter or milk and extra eggs to make it less dry, but after only adding an egg white I think this cake had the best consistency ever, no joke. It’s also the perfect size, too. Usually we have a lot of left over cake but tonight after four people eating it its about halfway gone. I strongly recommend baking this cake.

even the batter was rich and creamy﻿ 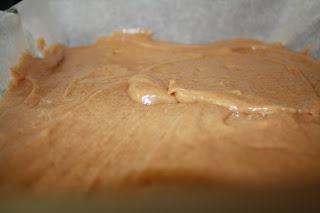 i was a little worried the topping ough go under the parchment paper lining, but thankfully it didnt﻿ 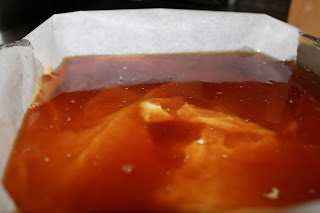 mmmm sticky gooey yummyness after cooling for a while
but as you can see, I didn't flip the cake out, so the "pudding" part isn't on top 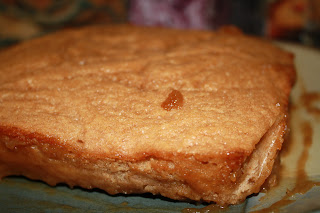 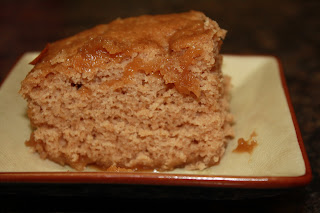