On the Rocks, No Salt 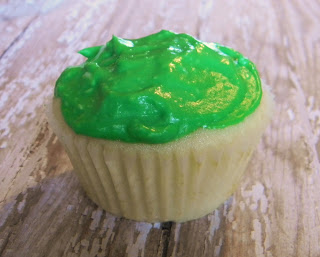 That is how my dad always orders his drink. His favorite drink to have (at least to my knowledge) is a Mojito. His birthday is tomorrow and sadly, not one person in our family is going to be here with him to celebrate (or on Father’s Day) because of a trip my sister, mom and I are taking. So today, we all decided to celebrate his birthday and Father’s Day and what kind of celebration is complete without cake.

I thought of this idea a few weeks back to make a Mojito cupcake for him because he likes the drink, but I didn’t want to make him a whole batch of cupcakes to eat all by his lonesome (that might be considered pathetic, a challenge, or a giant thank you…I don’t know which). Then I remembered that Peabody from Culinary Concoctions by Peabody had made orange cupcakes for two that she had originally adapted from How Sweet it Is. That, I decided, was what I was going to do, and when I put an idea in my head it usually locks in there and doesn’t go away.

I didn’t taste these cupcakes, but I made a trial run with my mom to see which way she liked better, a cupcake that had rum baked into the batter or one that had rum baked into the batter and had rum drizzled over the top. She liked the first one better, so I went with that, but added a little more rum because I got the impression that you couldn’t really taste it. I also had to adapt on the frosting because Peabody and Jessica both had leftover frosting, which I didn’t have, so I put a random amount of cream cheese, butter, powdered sugar, and juice of a lime wedge to make the frosting. The cream cheese didn’t seem to want to cooperate and actually blend all the way in with it’s fellow ingredients, but I don’t think my dad minded. He did however, scare me when he asked if it was a turkey flavored cupcake. I had put the cupcakes in a deli turkey container (yes, it was clean), but I feared that the smell had somehow infused itself into the cupcake. He then proceeded to tell me he was just joking and the cake tasted great and like a Mojito.

So go wish your fathers a Happy Father’s Day and if they like Mojitos, show your appreciation by baking them these cupcakes. 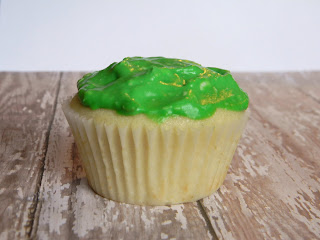 
Mojito Cupcakes
makes two cupcakes
adapted from How Sweet it Is