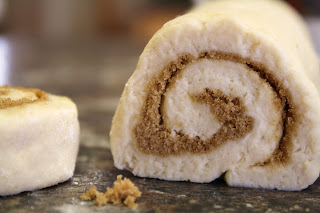 This week made me smile. On Wednesday, we had the first snow (that stuck) of the season. In Colorado, it is basically a law that it has to snow around Halloween; I think there has been one year out of the nine that I have lived here where it didn’t snow the week or the day of Halloween. We ended up getting about five inches of snow over night and the very next morning, we had about a two hour power outage at the school, you can imagine how fun that was.

Anyways, even though I love the snow, I hate being out in the cold and getting wet. I have poor blood circulation in my body which causes me to be cold 24/7 (even when it’s 90 degrees outside). I would much rather stay in my PJs, curled up on the couch with a blanket around me, sitting by the fire and watching the snow drift down from the sky. So, while my sister was out playing in the snow and making a fantastic looking snowman, I was making these Maple Swirl Biscuits. 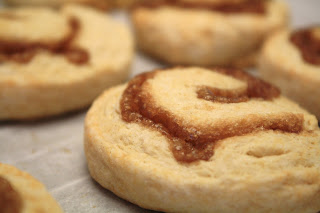 I realized the other day that I make way too many recipes from the internet and not enough from my magazines and cookbooks; I think they feel neglected. In order for my books and magazines to feel more loved, I will be baking from them more often. These biscuits came from Better Homes and Gardens Fall Baking 2011 magazine. I have bookmarked so many recipes in this thing, it’s ridiculous. These biscuits don’t have any wacky ingredients so you don’t have to run to the store in the freezing cold snow to get something you might use once.

The dough is similar to the Grape Jelly Roly-Poly I made back in mid-summer. It’s so flaky and crumbly in the best of ways and the filling is so delicious; it’s like a biscuit version of a cinnamon roll. I halved the recipe and I still ended up with 12 biscuits, but I guess that means I can have two instead of one, right? 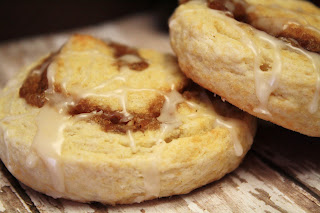