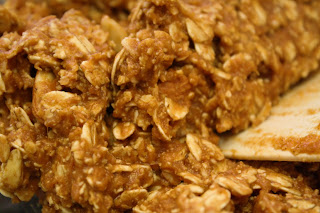 I think it was last week (or the week before) where I told you guys that I managed to score the second to last giant can of pumpkin puree. Well, because of it’s enormous stature, I’m having difficulty using it all up. I have managed to get a little dent in how much left-over pumpkin is sitting in the fridge, but it seems like it’s just starring at me, taunting me every time I open the door. So I’ve been searching all over for pumpkin recipes to use it all up. I think I’ve got like three different pumpkin bread recipes, two kinds of cookies and some yeast bread made with pumpkin, but who knows if I’ll have time to make them all. Either way, it’s still fun to see all the things you can do with pumpkin. For instance, these very chewy granola bars.


The other day I was looking on the internet for more pumpkin recipes when the thought passed through my mind: “Can you make pumpkin granola bars?”. The answer is yes. I had to do a lot of searching though. All of the recipes I initially found were just repeats of this one recipe that didn’t strike my fancy. Then, I came across this recipe on Clean Eating Chelsey. 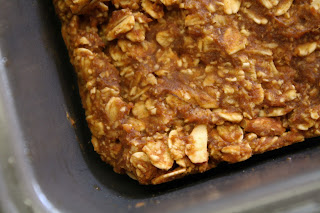 This is a quick and easy granola bar recipe. Putting together all of the ingredients takes no less than 10 minutes, and then all you have to do is wait for it to bake, simple as that. However, I did have a little trouble with the baking process. After the mixture was in the oven, I was worried that it wasn’t cooking. After the timer had gone off, they were still really soft, so I stuck them back in the oven for another couple of minutes and they were still really soft. I threw caution to the wind and took them out anyways, hoping for the best. I can never tell with some things if they are cooked all the way through or not. Some foods are just tricky like that. 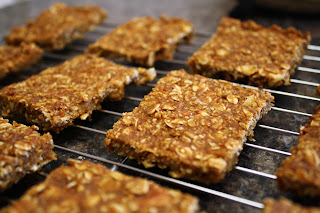 After taking a bite of one of the granola bars, I came to the conclusion that they aren’t really granola bars but a version of those oatmeal to go squares by Quaker. They are dense and very chewy. If you’ve ever had those Quaker oatmeal to go bars, and like the texture, then you are surly going to like this.
The pumpkin flavor is very subtle, or at least I thought so. I’m not so sure about my taste buds at the moment since I’m getting a cold, but I thought the amount of pumpkin was quite nice. I could definitely taste the pumpkin pie spice, and that made the bars taste nice and warm. Speaking of warm, these bars probably taste best (in my opinion) when they are slightly warm. I think a couple of these warmed up on a plate sitting next to a glass of cold milk would make a really nice breakfast, or snack, whichever you prefer. 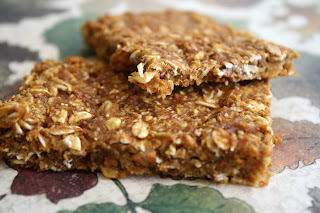