July 4, Day 7
Today was basically just a travel day. Nothing too exciting happened, besides arriving in Paris, but that wasn’t exciting, it was traumatic. I took the Chunnel from England aaaaaall the way to Paris, France, which was a good ride. Again, I slept for maybe half the train ride, but it was a fairly easy ride. The metro/underground/subway (whichever you prefer to call it) was a nightmare. I practically clung to my mom’s side the entire time. There were so many people and we didn’t know where we were going and we couldn’t read the signs. I think my mom took it far better than I did because I was a mess. When we finally got above ground I begged my mom to never go back down there again. 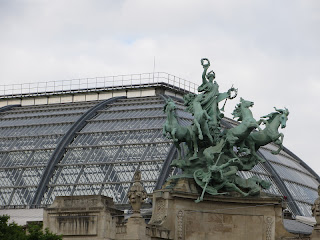 Anyways, we got to Paris pretty late in the day, so we didn’t do much except check into the hotel and walk around some. Our hotel was in walking distance to the Notre Dame, so we did go there. The Notre Dame is massive! I loved the architecture on the outside, but since I’m not religious, the inside didn’t really interest me too much, although the stain glass windows were really pretty. 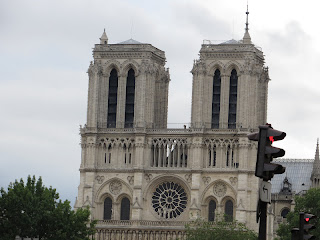 So that was basically it for the day. And since this post is so short, I’ll combine it with the next day as well.

Today my mom and I were much more adventurous. Since we were in Paris, we thought we might as well have croissants for breakfast, which was definitely the right move. We walked down to a little café down the street from our hotel. I took a look through the glass to see the array of pastry. I would have loved nothing more than to sit and eat everything that café had to offer, but I knew that wouldn’t be possible. Instead, a sugar-dusted almond triangle pastry caught my eye. This croissant was perfectly sweet and almondy. I absolutely loved it. I was really tempted to order another, but I restrained myself. 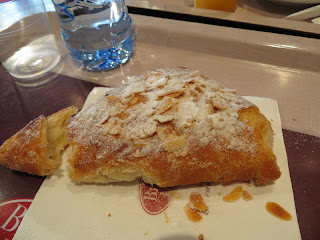 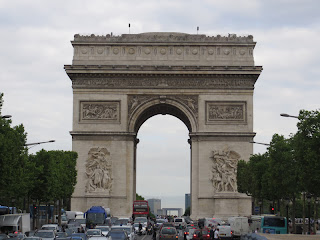 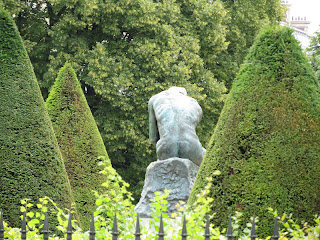 The Thinker's backside.... The bus only allowed us this view unfortunately.

By now, being this far into the trip, my mom and I are pretty exhausted (Don’t give me that look, you would be too if you were on a 7/8 hour time difference and walked miles almost every day.) so instead of walking everywhere we walked to go, we got tickets for the Paris bus tour. This way, we were able to hop on an off wherever our hearts desired, but we would still be able to see all the major sites of the city. 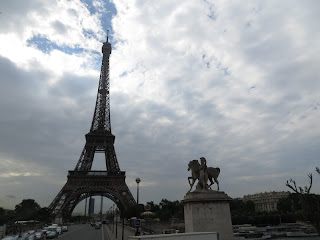 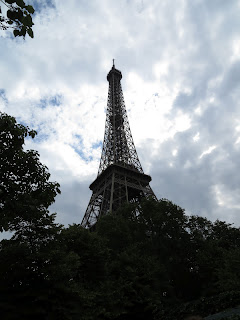 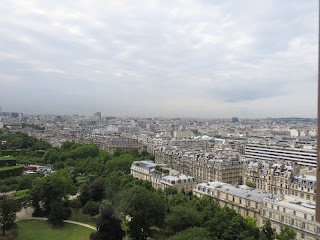 View from the first level of the Eiffel Tower (I walked up both flights of stairs. which is like 500-600 stairs at least!) 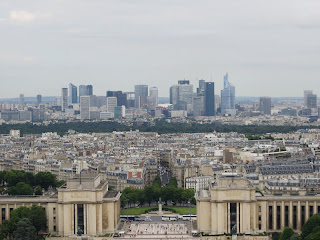 View from the second level. After this, if you wanted all the way to the top you would have to buy another ticket for the lift.

Around noon we finally arrive near the Louver. But, to get to the Louver we had to pass under an archway, and this archway was scarcely wider than the bus itself. It scared the crap out of me; I thought the for sure the bus wouldn’t make it through, but alas it did. When the bus stopped, my mom and I got off and walked towards the glass building. I didn’t know what to expect, but I certainly didn’t expect to go underground to see the biggest museum of all time! It was incredible to go down a flight of stairs and see all of this space! And that was just the lobby. My mom and I stayed on the first floor, for if we ventured out anymore I’m sure it would take an entire day to get through everything. 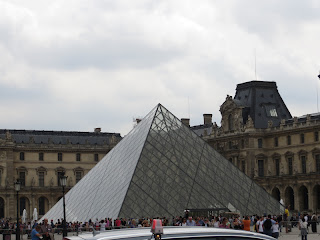 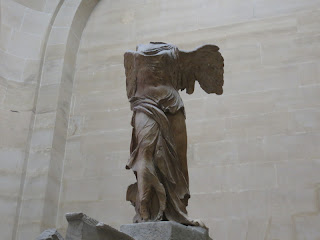 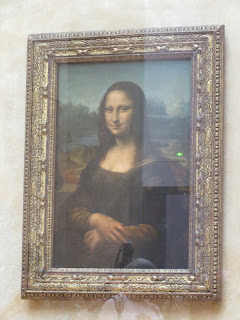 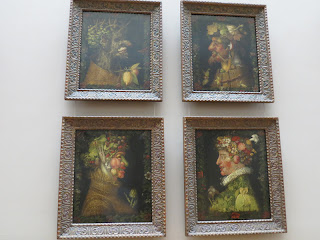 I wasn't able to figure out the name of these portraits, but they look very familiar! I just can't put my finger on it. 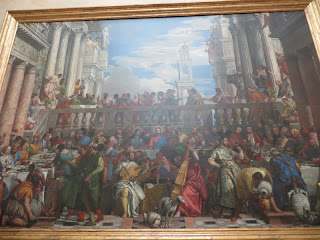 Seeing all the paintings and portraits were amazing! There were some really giant paintings that must have been fifty feet (just a slight exaggeration) high! I could never imagine painting something like that. Let alone have the patience to wait for it to dry. I would probably walk all over it trying to paint each corner and the middle. Then there were the very tiny paintings that were like 6x6 inches. I couldn’t imagine painting anything that small! I’d probably go blind. I was just so amazing at all the art work. Anyone that has any sort of artistic ability has my respect. 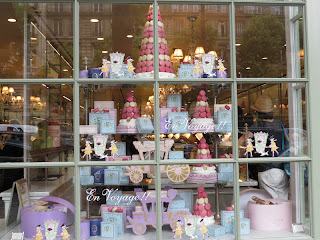 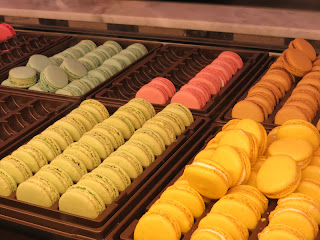 Sorry about the lighting, but I didn't want to draw too much attnetion to myself and the camerea while I was in the store.

After seeing the Louver we came out and it looked like the clouds were threatening to upon up and rain on us, but they stayed intact, or a while at least. Since it wasn’t raining yet, we walked up to the fashion district. My goodness there were so many stores and all the window displays were so pretty and sparkly! My mom saw a dress in a Ralph Lauren window priced at 4,600 euros (which she then later explained was about $8,000!) Then we come across Laduree. OMG I nearly died looking in the window. The window display was so amazing and so sophisticated! When we went in I got really excited. Rows upon rows of French macarons lined the display boxes, as well as other French pastries with glistening glazes and rich dark chocolate cakes with mousse fillings. Oh man it was a dream. I had such a hard time choosing which macaron I would order, and sadly I think the Frenchman behind the counter was a little annoyed at me as well, but these would be my first macarons. I went with a classic, vanilla bean, just to get a sense of what a real macaron was, as well as strawberry candy, which was so pretty and pink with sugar crystals on top. 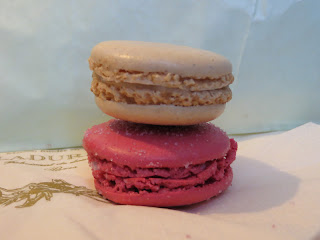 Vanilla on top and Strawberry Candy on bottom.

When I took my first bite of the vanilla, I was just a tad disappointed. It didn’t really taste much like anything. But with each bite, my taste buds started to adjust and I could definitely taste the lovely hint of vanilla. And because I am me and I like to dissect things, I split open the half that I had not eaten to try the filling by itself. My god that was the best filling I had ever tasted. It was creamy, soft, and sort of fluffy. And there were vanilla bean specks. Oh it was so good. Next up: the strawberry candy. This pink gem is part of the “Incroyables” collection. The collection is part of their 150th anniversary and “pay[s] tribute to Ladurée first macaron and to the delicious flavour of almonds.” I’m so glad I got this one because it was sweet and just a tad bit tart (I don’t like heavily tarted things – and yes I’m sure every grammar teacher, including my former teacher Mrs. B is cringing at that line). I’ve never had an actual strawberry before, but it tasted just like how I would imagine a strawberry would taste like. Too bad I hate eating fruit. Anyways, unlike the vanilla macaron, the filling in this one was like a flat and circular marshmallow. It was absolutely delicious! And now I can'’ wait to try and make my own macarons. I’m actually excited to try all sorts of British and French treats! 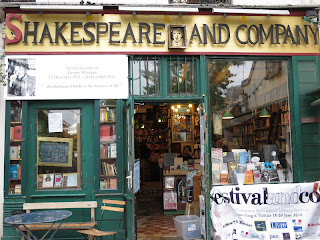 A fantastic (and apparently famous) bookstore. So many books to go through. I found a book I really liked that I must go on Amazon and order. It's called A Confederacy of Dunces by John Kennedy Toole. 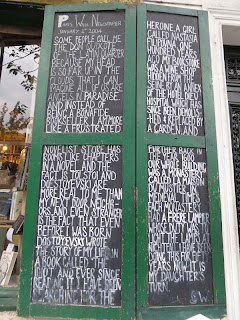 G.W. stood for George Whitman. Born December 12, 1913; Died December 14, 2011. Whitman was the owner of the bookstore and has now passed it onto his daughter.

When we came out of Laduree the rain had begun, so my mom and I hopped on the bus tour one more time to drop us off near the hotel where we could get some dinner. Did you know that the French eat dinner really late? And I’m not talking late like 7:30 late; I’m talking about they don’t get to the restaurant until at least 9 pm. Yeah, I don’t know how they do it because I need dinner by like 6:30 pm at the latest. Anyways, while we were halfway through our dinner, this Dutch couple who can’t speak a lick of French and the tiniest amount of English come in. They were so adorable, but I felt so bad. They were lost what to order and came over to us for advice. We told them what we were eating, and they ended up ordering the exact same thing we did. When we were done, we passed by their table and they seemed to enjoy their food. I sure hope they’re doing ok.

So this is it. This was my amazing/exhilarating/terrifying/fantastic graduation trip. Well, technically there was one more day, but there are no pictures because it was just my mom and I going back to England and staying in a hotel by the airport so we could catch our 7:45am flight. Anyways, I'm thankful to my dad for suggesting England and France. But I'm also eternally grateful to my mom for going with me, and experiencing all of these things with me. I will always remember this. Thank you guys! (Boy I hope I don't sound cheesy)

Tomorrow I'll post the recipe of a little something I made before the trip. 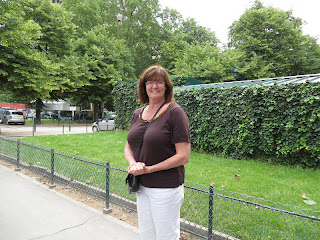