This day was the worst day, weather wise. The day started off with some blue sky peeking out of massive white clouds. Those white clouds turned grey very quickly and then the rain started. You know how there can be different type of rain, like the small, fast drops that sting your skins, or the really fat drops that go “plunk!”. Well this was the kind of rain that was just really wet and heavy. Not fun. Even though the weather was bad, my mom and I persevered. 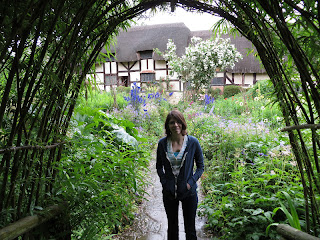 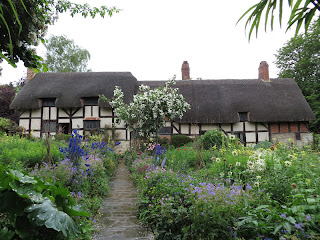 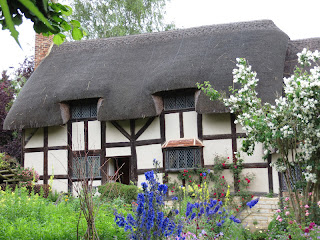 It's so quaint and cute and pretty! 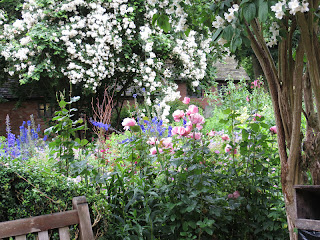 And just look at those flowers! Flowers like that doesn't exist in Colorado, period.

First we went to Anne Hathaway’s cottage. The entire place was covered in lush green trees and bushes, and beautifully bloomed flowers. It was amazing to look at everything growing around the cottage. Pictures weren’t allowed inside the house, but we could take as many outside as we wanted. The inside of the cottage was amazing. The cottage had originally been only two rooms. I can’t remember how big the tour guide said they were, but they were both pretty small. And the most amazing part was that seven people were living together in those two rooms, and there was no bathroom! I know I’m getting all dramatic because I live in the 21st century, but still. Imagine living with six other people in such a small house with no bathroom. I give the Hathaways props. Anne’s father was apparently very rich and when he died he gave each of his children a little over £10 each. Something that was equivalent to about $300,000 today (I think that’s right, but I’m only about 33% sure). Pretty soon the house grew and grew. There are several bedrooms upstairs and there is a common room and a kitchen. And most of the original foundation is still intact. 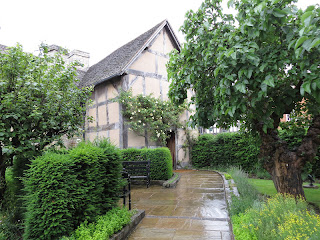 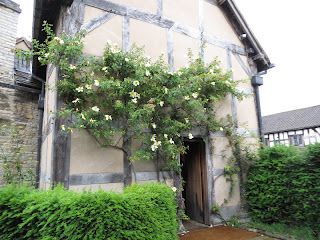 Again, look at how green everything is! (sorry, I'm just mesmerized)

Just a few miles up the road is Shakespeare’s birthplace. His birthplace was also interesting. It wasn’t as beautifully lush as the cottage, but it was still nice to look at. (By the way, did you know that Anne married Shakespeare when she was 26 and he was 18?) The Shakespeare’s own two beds (one bed cost about 2 years pay is what the instructor said), so the Shakespeare’s were definitely well off. And their home was quite large too. Mr. Shakespeare was a glove maker and had his workshop right in his own home. And since gloves were very expensive and high-class back then, not many people had them. And when someone did buy a pair of gloves, they wouldn’t wear them! Strange, I know. Instead of wearing the expensive gloves, they would show it off by pinning it to their clothes. It’s fun to learn how people lived way back when. 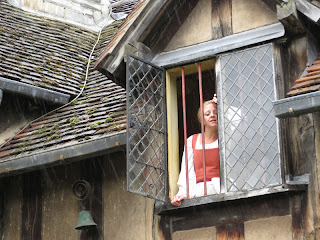 At one point two actors came out and preformed the balcony scene from Romeo & Juliet.

After spending some time in Shakespeare’s birthplace my mom and I were on the move again. This time we drove up to Warwick Castle. The castle part was very interesting, but I couldn’t help but feel the place had turned into one of the worst tourist attractions; it just kind of felt like an amusement park, but without the rides. I dunno. I hope I’m not confusing you, but it was just a feeling I got. The inside was beautiful. And there was a little party going on too. Wax figures were scattered throughout the rooms and there were little facts about each person attending the party. That was really fun and clever I thought. One thing I will always remember is that everyone had affairs with everyone in that household, my goodness. But it was still very fun. I even saw one of the prisons that were kept underground. Jeeze those were scary and I wouldn’t want to be locked down there and forgotten (as most prisoners were). 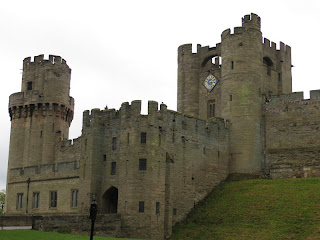 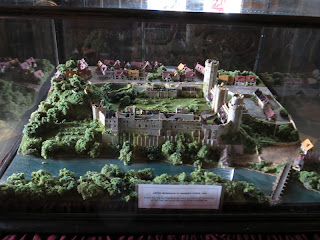 Diorama of the entire castle
*note: I would show pictures of the inside, but most of them are just way too dark to really get a sense of the place.

Not far away from Warwick Castle is a beautiful garden that my mom and I visited (I know I’ve said every garden is beautiful, but they really are. When you’re not used to seeing so much green and life, you really notice how pretty everything is.) The garden was donated by Princess Diana. I feel like there was nothing she didn’t do. But it really was so pretty. And there was even a little mini waterfall flowing into a pond. 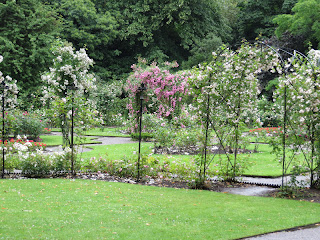 Just part of the garden. I don't know why I didn't take as many pictures of this garden.
Posted by Unknown at 9:41 PM