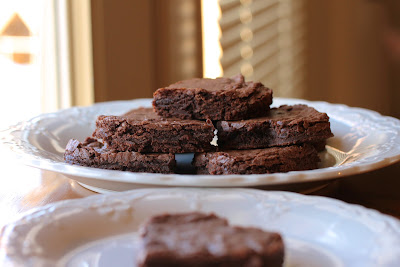 So for those of you who have been living under a rock, or have just lost track of time, today is Valentine’s Day. For some this means snuggling up to your cuddle-bunny, pudding-cup, sweetie-pie, etc., feeding each other romantic meals by candlelight and sharing fancy desserts. For others, like myself, it means well… nothing. I don’t mind, really. I have brownies to keep me company.
In case you didn’t know, I only have three brownie recipes on here. I have no idea why I have so little; I love chocolate, and fudginess, so why do I only have three recipes? Probably because I love a certain kind of brownie: the kind of brownie made from a box. Those brownies have everything I’m looking for: deep dark chocolate color, rich chocolate taste, crinkly paper-thin tops, and chewy fudgy texture. I may be wrong, but I think a lot of bloggers have trouble finding that perfect balance in a scratch recipe. 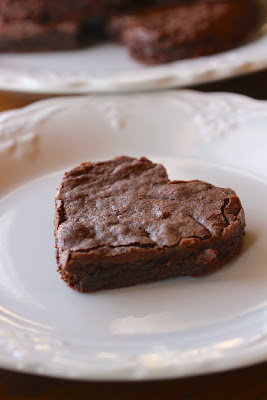 When I decided to make brownies, it was 6 in the morning on a Saturday. I looked through my “To Bake” list and found like one brownie recipe: s’mores brownie. When I looked through the saved recipes on Foodgawker, none of the brownies caught my eye. Then I looked on Pintrest, and the same thing happened. I looked on foodgawker again and these Fudgy Brownies looked promising. They have the crinkly top and the deep dark color along with the look of pure chewy fudginess going on in the center.
This recipe calls for a technique I have never seen in brownies. Instead of adding leavening, you whip up egg whites and sugar. For some reason I could not get my egg whites and sugar to whip to the soft peaks I wanted, but I somehow made it work. The rend result was a semi-crinkle crust, and a dense fudgy interior.
The flavor of this brownie is the thing that really shines through, though. The flavor rivals all scratch brownies I have ever had. Even my roommate, who has only ever eaten one kind of brownie her entire life: Pillsbury boxed mix, said these were really good. So there may be hope for made-from-scratch brownies yet. 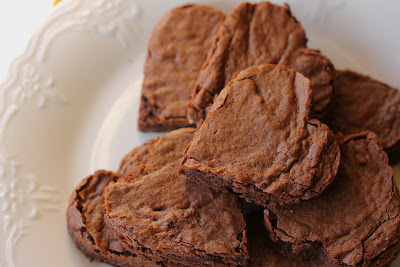 Happy Valentine's Day! <3
Fudgy Brownies
Slightly adapted from Juanita’s Cocina
Makes a 9-inch square pan
Ingredients
8 tbsp. unsalted butter
½ cup unsweetened natural cocoa powder, sifted
¾ cup dark brown sugar
2 eggs, separated
1 tsp. pure vanilla extract
½ tsp. salt
1 cup unbleached all-purpose flour, sifted
1 cup sugar
Directions
Preheat the oven to 350 degrees. Line a 9-inch square pan with tin foil. Grease tin foil with cooking spray; set the pan aside.
In a medium saucepan, melt butter over medium heat. Once completely melted, remove from heat and whisk in the sifted cocoa powder (sifting the cocoa powder helps remove those pesky clumps and makes for easier mixing). Stir until smooth. Beat in the brown sugar, egg yolks, vanilla and salt. The mixture will be granular. Mix in the flour until combined. The mixture will be very thick.
Beat egg whites in a large bowl until foamy. Gradually add the sugar. Beat on medium speed until soft peaks form. Fold the egg white and sugar mixture into the chocolate mixture, making sure not to over mix.
Pour the batter into the prepared pan. Bake for 16-18 minutes or until a toothpick comes out clean when inserted in the center. Allow brownies to cool on a wire rack for 10 minutes before removing from the pan. Cool to room temperature before slicing.
Posted by Unknown at 11:40 AM