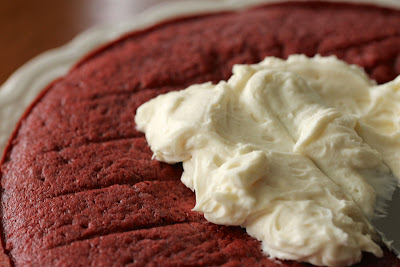 Hello, and Happy Wednesday. I’m going to help you get over the “hump day” with cake today? Sound good? Ok, lets go.

This cake was the favorite in the Cake Slice Baker poll for this month, and I’m so glad it was. It was initially up for voting in December but it lost, and due to the lovely red color and Valentine’s Day being in February, this cake was up for voting again. I have to admit I was pretty excited when this cake won because I had never baked red velvet anything before. Well that sort of turned into a lie since I made these red velvet donuts way before I made this cake.

This cake sort of reminds me of a cheesecake cake. You know those cheesecakes with the cake-like crust? Yeah, only it’s cake and the frosting tastes exactly like lovely tasting cheesecake. I know that’s not very descriptive, but I don’t care. 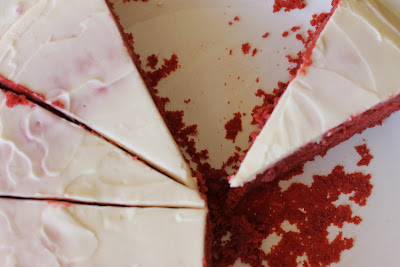 The cake is oh so soft and moist, even after several days in the fridge! This cake did not get stale whatsoever. The recipe calls for quite a bit of cocoa powder, and you can sort of taste it, which is nice, because I’ve heard you can taste red food coloring. Tasting red food coloring doesn’t sound appetizing, so it’s nice this cake has a little chocolate hint.

The frosting is absolutely amazing! I have to say one thing though: I was not a fan when I first dipped my finger in the bowl. It tasted too… cheesy? But I decided to frost the cake with it anyways. When I was done with the bowl of frosting I gave the leftovers to my roommate to eat, and by golly she almost licked the bowl clean! Then after storing the cake in the fridge for a while, I cut myself a slice and was shocked at how much I loved the frosting! The frosting pairs so beautifully with this cake.

I’m so glad I got a chance to make this cake. So far it seems this cake book is the best in the three years I’ve participated in the Cake Slice Bakers. 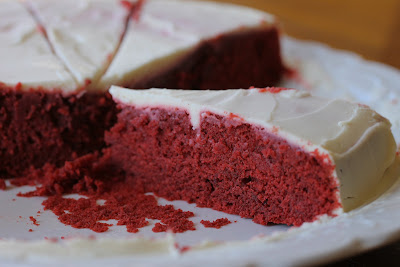 Directions
For the Cake: Preheat the oven to 350 F. Put a parchment round at the bottom of a 9-inch round cake pan. Grease the sides and parchment paper with cooking spray.

In a small bowl, sift together the flour, cocoa powder, baking powder, and salt. Whisk to thoroughly combine, set aside.

In the bowl of an electric mixer, beat the butter and sugar on medium-high speed until fluffy. Scrape the sides of the bowl as necessary. With the mixer on low speed, drizzle in the oil. Add the vanilla and food coloring. Mix until completely combined. Slowly turn the mixer back up to medium-high and beat until fluffy again. Blend the eggs and egg yolk one at a time. Turn the mixer down to low speed and gradually add the flour mixture in three parts, alternating with the buttermilk in two parts, starting and ending with the flour mixture. Scrape down the sides of the bowl after each addition. Be careful not to over-mix the batter.

Scrape the batter into the prepared pan and smooth over the top. Gently tap the pan on the counter a few times to release any air bubbles. Bake on the center rack for about 25 minutes or until a toothpick comes out clean when inserted into the middle (the top should also look slightly cracked). Cool the cake in the pan for 30 minutes before removing onto a cooling rack, face up, until the cake reaches room temperature. Frost the cake as you please.

For the Frosting: Beat the cream cheese in a medium bowl until uniform in texture. Add the mascarpone, cream, and sugar. Beat on low speed until combined. Scrape the sides of the bowl as necessary. Turn the speed up to high and beat until the frosting looks creamy and thick. Add vanilla and mix until just blended.
Posted by Unknown at 7:06 PM