After having a semi-good night’s rest (jet-lag can really do a number on you, as well as the drunks singing on the streets at 2 in the morning) my mom and I were ready to do some real sight-seeing.

The day started out as kind of overcast and gloomy, but that didn’t stop us from doing a little bit of walking to get to the Tower of London. We mainly went to see the Crown Jewels, but we decided to take a little mini tour given by a guide dressed as a beefeater (an old English term for a royal guard). He was really funny and had some good stories, most of which were about all the beheadings that went on within the walls of the castle. The Tower actually started out as royal residency, but it soon became a prison. Young princes Edward V and Richard were supposedly murdered in there in the late 1400s. Excavators even found the skeletons of two children buried on the grounds, but there’s nothing to link the skeletons to the brothers. 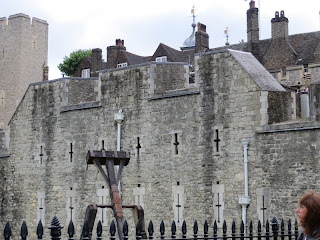 Inside Tower of London 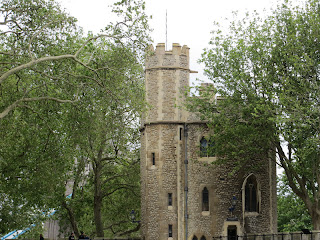 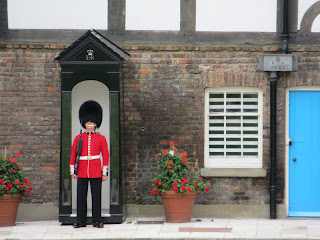 After the mini tour was done, guests could wander around the grounds of their own accord. My mom and I took a look in some of the rooms, and we took a look in one of the prisons. After a quick go around of some of the places, we finally made our way to the jewels. Now I didn’t get any pictures of the jewels because pictures weren’t allowed in the room, but boy were they spectacular! The crowns and scepters were just so pretty and shiny. There is a conveyor belt that keeps people moving along the row of crowns (which was pretty smart since I’m sure there would have been an enormous crowd around the glass). Then, in it’s own little showcase at the end of the hall is Queen Elizabeth II’s crown. It is stunning to look at. The best part about the crown (besides the diamonds and other sparkly gems) is the four dangling pearls in the center of the crown. Those pearls were once Queen Elizabeth I earrings! Imagine wearing Queen Elizabeth I’s earrings on your crown? (Let alone actually having a crown!) 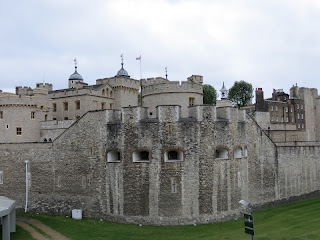 Outside Tower of London 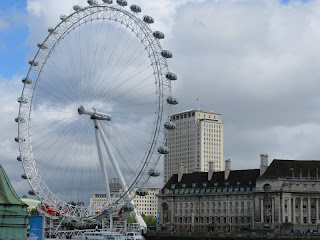 While we were in the jewel room the sun had decided to finally come out and play. I had told my mom before that I really wanted to go in the London Eye (a huge ferris wheel type thing that gives you an incredible 3D look of London), however, my mom suggested going on a different day because of the sulky weather. But as soon as we saw the sun had come out, we hastily made our way to the line for tickets. We didn’t even need to wait that long to get into our little bubble, which was nice. However, the little bubble room on the ferris wheel don’t sop to let you on, so I was strategically trying to get on without falling on my face, when a little rugrat kid, pushed me out of the way. I still managed to get on before the bubble left, but I was kind of peeved. This didn’t stop me from enjoying the view, though. My, oh my, the view from every angle was just spectacular. The view from the very tippy top was probably the best view you could possibly imagine. You can see the city with all it’s modern buildings on one side, and on the other is the historical side, a side that I absolutely loved looking at. My dad wanted me to go to the building that’s shaped like a giant glass egg, but I wasn’t able to, so instead I got some pictures for him. 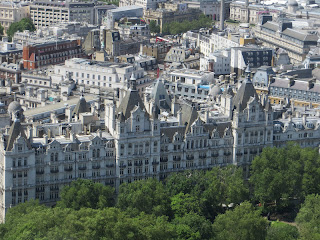 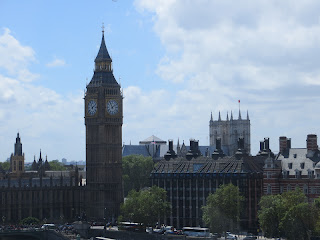 View of Big Ben from the London Eye 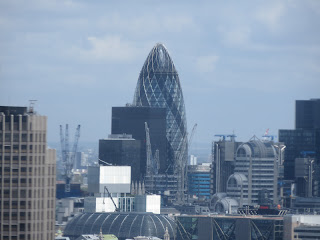 The egg building I was talking about

After going on the London Eye, my mom wanted to visit Westminster Abby (she loves old churchy places). I thought it was cool, but I’m not very religious and it didn’t interest me much, but it was kind of cool to see the caskets and architecture. But I must admit, jet-let got hold of me and I started to take a nap on one of the benches. After about 10 minutes, my mom suggested we move to the seats in the middle of the room because people were trying to look at the writing hidden under my feet. When I moved to the chairs, I just collapsed and napped for a good half hour on my mom’s shoulder (Thank you mama). By the time I woke up I was just so groggy that I wanted to go back to the hotel and rest a little more. That is until I saw a kiosk with food for sale. I picked up a brownie to get some sugar into me (I was so groggy I didn’t even have my eyes open. I kind of just shoved the brownie at the cashier {sorry Mr. Cashier} and grunted). Once the brownie was in my system I perked right up. 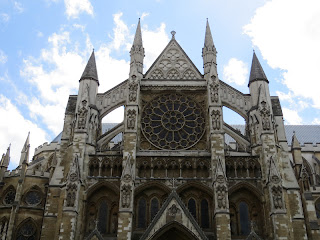 Since I was no longer tired, my mom and I decided to take a stroll through St. James Park (a really beautiful and lush park) and on the other end was Buckingham Palace! We crossed the street and stood at gates, watching the guards march around in their tall fuzzy hats. My mom noticed the flag was up, which was kind of exciting because when the flag is up it means the queen is home. 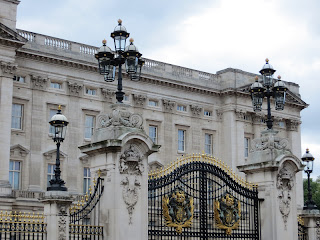 After staring at the palace walls for a few minutes my mom and I decided to walk back towards to hotel to find a pub nearby for dinner. We ended up going to one called The Swan which had the most amazing looking food! I got the Taylor Walker Platter which consisted of British sausages, two mini meat pies, and little bread puddings. I didn’t want to pies, so my mom gladly took them off my hands. The entire plate was the most amazing main dish I had in London, period. 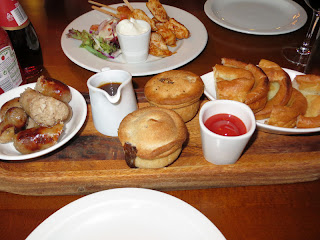 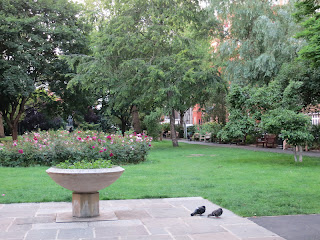 Dinner gave us a little more energy, so we took the long way back to the hotel and strolled through Queen Square Garden. There was a little plaque and fountain dedicated to Queen Elizabeth II’s Silver Jubilee. Casually walking through the park was really nice way to relax before heading to the hotel to energize for what the next day would bring us. 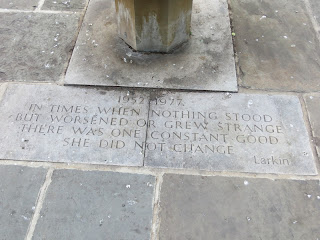 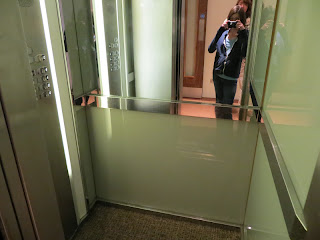 P.S. This doesn't have to do with anything other than the fact that England has TINY elevators. This elevator held me, my mom, and one other person quite snuggly and it was meant to hold six people.
Posted by Unknown at 7:10 PM