I can’t believe I haven’t posted this recipe yet. This cookie recipe is one of my all time favorites; it probably has to do with the cinnamon sugar coating because I love cinnamon sugar, yum yum. Also the name makes me smile, just say it “snickerdoodle”, doesn’t it bring on the urge to giggle or dare I say it, snicker. They are puffy and cloud-like when they come out of the oven, but once they have a chance to cool down on the cooling rack they set up just a little and become the perfect cookie.

The recipe, however it really modified. I have Martha Stewart’s Cookie book and that’s the recipe I usually use when making them, but I looked at the recipe just one more time and realized that it doesn’t used cream of tarter and baking soda like Martha Stewart’s online recipe does and this confused me a little, so I looked online and found most of the snickerdoodle cookies used cream of tarter and baking soda. I tossed the baking powder from this recipe and added in the appropriate amount of leavening agents. Also, one recipe called for half shortening and half butter and the other called for all butter. Well I didn’t have shortening so I used butter, but to my horror, I was short half a stick of butter. However, despite my predicament, I still make these. I would have to do a side-by-side taste test to see if there is any difference in the taste when half a stick of butter is missing or if I should use half butter and half shortening, but for now I am going to enjoy my tasty snickerdoodles.


Mmmm, fresh right out of the oven. 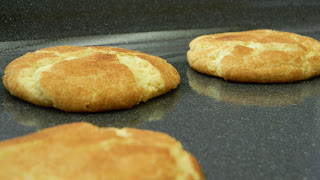 Look at those cinnamon sugar crinkles this cookie makes when it bakes! 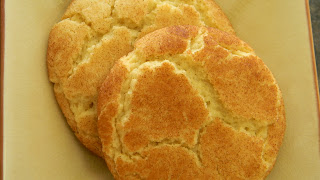 So last week(ish) I said I wanted to make fudge, but I didn’t have a candy thermometer, so I opted for making butterscotch blondies. Well I shopped online for a while until I found a candy thermometer that was a good price and had at least 3 star reviews. After searching and searching, I found one made by the CIA; no, not the secrete CIA but the Culinary Institute of America. This is an awesome thermometer for a first time candy maker, like myself. But this isn’t a product review, this is about FUDGE! Brown Sugar Fudge to be exact.

I was so nervous when making this. I was checking and double checking the recipe instructions so many times, that I have probably memorized it. And then the temperature of the liquid fudge wasn’t rising and that was making me panic because I thought I would end up burning the sugar, but I realized I didn’t have the sugar to a full boil. But considering this was my first time melting sugar and making fudge, I think things went pretty smoothly.

Now this was originally for my sister since she loves brown sugar or anything with sugar for that matter. She says it tastes really delicious, like caramel. However, I don’t think it’s all that special, maybe I’m used to a more fudgy fudge, you know like the ones that are kinda soft, but yet really dense and just filled with yummyness? I’m not saying these are nasty or gross or anything, I’m saying they are different and I’m not sure I’m ready to call it fudge, but if I don’t call it fudge, I don’t know what to call it, so I’ll just stick with Brown Sugar Fudge for right now.


Isn't this a gorgeous site? I almost felt bad for marking out the squares is was so pretty. 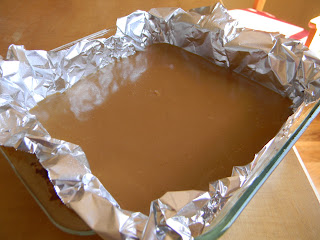 But I had to mark the squares, otherwise I couldn't know where to cut. 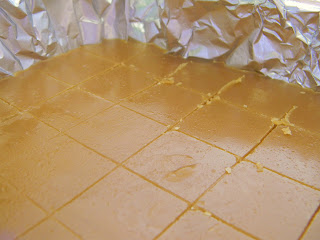 However, the fudge didn't seem to want to cut to nicely anyways... 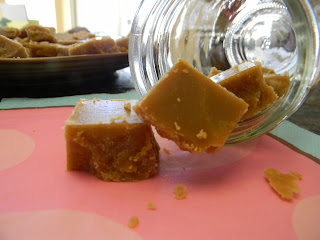 Directions
*the 240 degree F temperature is for people at sea level. For every 500ft that you are elevated, subtract a degree from the final point. For example. If you are 3,500ft above sea level and the directions say to bring the mixture to 250 degrees then you subtract 7 degrees, so you stop boiling your product at 243 degrees instead.

So a couple days I posted about Irish Lace Biscuits for St. Patrick’s Day because I had misread some directions about St. Brigid's Oatcakes (farls). Well I finally got around to making it after letting the oats sit in a bowl of buttermilk over night. The thing is, this was a really weird recipe.

There is no binder (unless you call buttermilk a binder) so the dough wasn’t really forming into a ball shape, so I added more butter milk, which made about a 2% difference so I just said “What the hay” and put in an egg white, this seemed to help a little more. So when it came time to forming the dough into a big round circle, it just couldn’t be done, so I made it into 6 softball-sized balls. Once I put the dough balls into the oven, I was skeptical of the 30-35 minute baking time so I kept setting the timer for 10 minute intervals and it turns out that 22 minutes is a pretty decent baking time.

These…things (I honestly don’t know what to call them) did fall apart in the oven a little bit, but I guess that’s ok. Despite the rustic look of these things, they taste…pretty ok. They have a nice oaty/bread taste and they taste even better with jelly.

I take back everything I said, I figured out what the taste was, it's basically pizza dough as my dad calls it. And I've changed my mind these things are definitely not worth eating in my book haha. My sister tried them and she just had this look and said "I'm sorry, I don't want to be rude and not swallow, so I'm going to swallow anyways". So me, Emily and my dad had a good laugh about how awful these things are. My mom tried defending them, but the things wound up in the trash. I'm not going to delete this post because for one, it's funny and for two, I don't want to share just the good things, I want to share the bad things on this blog too.

I know these aren't the prettiest things... 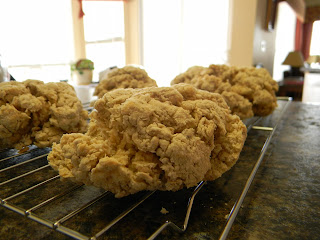 but with some jelly, they look very pretty, and taste okish 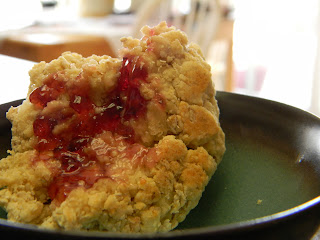 Happy St. Patrick’s Day everyone! I hope you wore green. I always wear green on St. Patrick’s Day. I remember how in elementary school if you didn’t wear green you would get pinched a thousand times by everyone! Now that I’m in high school, I’ve noticed not a whole lot of people wear green, which is very sad. I loved how the teachers would spill green paint on desks and just make a huge mess and blame it on the leprechauns and now teachers don’t do anything special for St. Patrick’s Day. Oh well, I guess it comes with the territory of getting older, but lets talk about cookies! I initially wanted to make an Irish farl for today, but I miss-read the directions and I’m supposed to do something over night so I quickly pulled this recipe out. It is kind of like an oatmeal cookie, but it’s thinner and crisper, plus there is no peanut butter, in fact there are only six ingredients in the recipe, five if you don’t count salt as an ingredient. I had to use old fashioned oats for this recipe, which I hadn’t used before, I’m always used to the instant when baking.

I’m usually not a fan of thin, crisp cookies, but these are more like biscuits, so I guess it’s ok. I like the snap they gave when I broke them in half and the almond flavor was just enough. I ended up eating four in one sitting, haha.


It may seem weird to say about a crisp biscuit, but these were light as air!﻿ 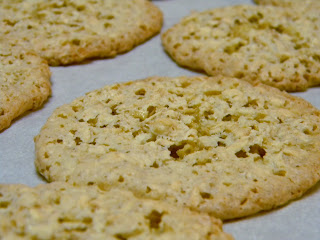 I found that leaving the batter in the fridge for 10 minutes before baking also gave a fluffier, softer cookie. 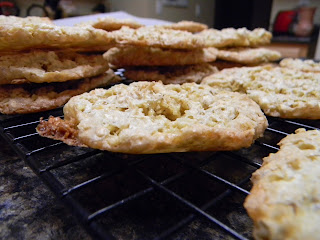 So I was originally supposed to make brown sugar fudge yesterday, but I don’t own a candy thermometer. So I was going to buy one but I couldn’t find a decent one, so I decided to put the brown sugar fudge on hold. Instead, I made this butterscotch blondie. I didn’t want to make cookies or a cake or anything like that, I wanted to try something new, which is why I made this little beauty. 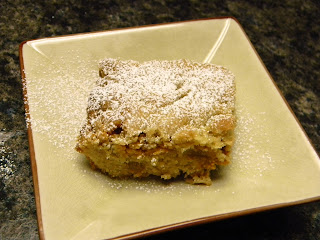 To my recollection, I have never had a blondie, but I guessed it was like a cousin to the brownie, just not chocolaty. Well, to make a short story even shorter, these blondies were pretty darn fantastic. I have never used butterscotch chips before, but I’ve always wanted to and because I couldn’t find butter fudge (whatever that is) I decided to sub in butterscotch chips. I think they may overpower the blondie just a little bit, but not much. It’s a nice combination.

I was surprised at the outcome of the batter though. I was expecting some sort of fluid like batter, but it turned into more of a cookie dough batter. I don’t know if that’s how many blondies are or if it’s just this particular recipe. Either way, the batter tasted good and it baked well too.

I was really tempted to just make this into a cookie,s icne the batter was so thick, but I stuck to the blondie aspect of it. 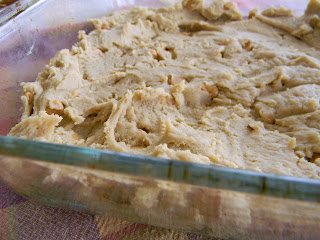 Here it is, all nice and golden brown. 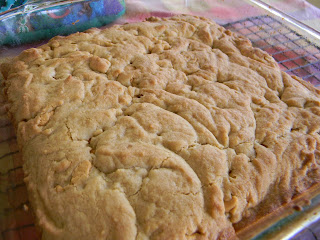 My dad also got a new camera, and so I've been trying to take pictures with it instead of my sister's camera. 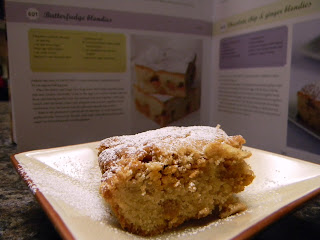 Directions
This can be left out at room temperture, but it tends to get a little stiff, so to soften it up a bit, place blodnie square onto a plate and microwave it for about 10 seconds.