I would like divert your attention to this Ooey Gooey Chocolate Pudding Cake. I saw it Saturday on Dessert First, hosted by Anne Thronton, on the Food Network. Have you ever been in that situation of when you first see something and you’re like “Oh my God, I have to make that?” That’s how it was for me. I saw this and I instantly knew I had to make this cake and I thought, why not for Easter dessert?

The first thing I want to tell you is that this is seriously one of the simplest cakes you can ever make. There is no electric mixer required and cleanup is a snap! Also, if you’re one of those people that don’t eat cake, cookie or whatever batter because you’re afraid of the uncooked egg in it, you can’t use that excuse with this recipe; there is not once trace of egg here. The batter tastes really fudgey and tastes so delicious! However, it is really hard to spread onto the pan, it is so thick. This cake also rose to incredible heights! I was a little disappointed when I realized the batter just barely covered the bottom of my square pan, but boy did my eyes grow wide when I took it out of the oven! The cake had probably tripled in size (then sunk down just a little bit as it cooled, but no biggy). I could see the pudding part of the cake ooze out of the sides. When I stuck a skewer into the cake to see if it was done, I expected to see a stream of chocolate pudding coming off, but the skewer came out completely clean, even though I could see the liquidy chocolate on the side. I don’t know why, but this amazed me.

Now the taste was just as fudgey as it looked./ I’m pretty sure that if I had used a better quality cocoa powder, the cake would have tasted richer, and more decadent, but all I had on hand was unsweetened Hershey cocoa powder. The pudding was absolutely phenomenal too. It looked and tasted just like regular chocolate pudding; it wasn’t like uncooked batter like you see in lava cakes like I expected. Like I said before though, I really wish I owned a better quality cocoa powder because that would just amplify this cake in so many ways.


Mmm, fresh out of the oven goodness 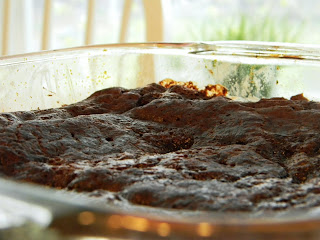 This was the first piece, so it's a little dishevelled, but it's a great picture of the pudding layer 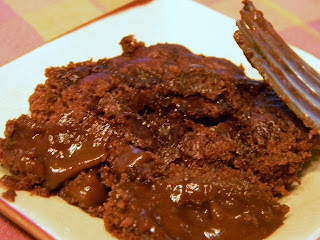 I hope everyone who celebrates Easter had a wonderful holiday and to those of you who don’t: I hope you had a marvelous Sunday.


After it had been in the fridge over night, I got a better picture. Doesn't it look yummy? 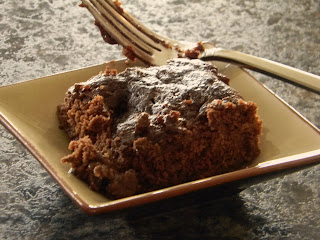 Hey everyone! These past couple of weeks have been really special. I want to say about three weeks ago my sister found out that she was finally getting her own horse. It has been her dream to a horse since basically forever and just last Sunday, she feel in love with a horse named Apollo. He is gorgeous and my sister was so happy that she sobbed with happiness for a really, really long time. Also, about two weeks ago I got to attend the Masters with my dad, which was really fun and I enjoyed being there with him and the people watching and the golf watching. It was all just a blast. Now finally, Sunday was prom night for my school, and although I didn’t go to the dance, I went to the school sponsored after prom party which runs from midnight to five in the morning. I don’t know how I managed it, but I stayed up the whole time and played games with friends and ended up winning some really cool prizes.

Speaking of special, lets get on with a very special cake. This month’s cake for the Cake Slice Bakers is the Cold Oven Cream Cheese Pound Cake. This first thing that makes this a special cake is that it is cooked while the oven is preheating. This means that you don’t reheat your oven until the cake is finally made, only once the cake is in the oven, you can heat up the oven.Now, I’m sure that you can probably preheat the oven and then bake the cake, but I’m not positive you’ll get the same results. Second off, this is a very tender cake and it is probably one of the best cakes made from Cake Keeper Cakes, I think. This cake is very moist and a very good mix between light and airy and thick and dense. I can’t really describe it. And the taste is phenomenal. I really wish I had added more lemon zest to it because the lemon flavor wasn’t coming out as much as I’d like, but that’s what you get when you don’t own a zester and you’re trying to zest a lemon with a cheese grater, ha ha. I think it also had to do with the fact that I’ve never really zested anything before and I was just tired of zesting a huge lemon.

This cake also had a nice outer crust to it. I ate the first slice of cake after it had been inverted onto a plate, so I got a lot of crust and it was superb. I like crusts, I don’t know why, I just do. Now it may seem weird to talk about a cake crust, but it’s an important part of the cake. You don’t want a spongy crust because it doesn’t add to the texture of the cake and you don’t want a burnt crust because then no one will want to eat the cake if they take one look at the exterior and thing it’s burnt! This cake had a perfectly crisp crust, golden brown, crust and it defiantly passed the crust test.

Now, I made this cake into a standard loaf pan because I don’t own a bunt pan and I didn’t want a whole bunch of cake because what usually happens is that I end up having to eat most of it because no one else wants to eat my stuff after a day or so. Well, right from the start, I had this dilemma. The recipe called for a 12 cup bunt pan and I had no clue how much my loaf pan could hold, so I tried measuring it and then looking up to see what it’s capacity was, only to find out that I can’t seem to measure a stupid pan. So I poured cups and cups of water into the pan until it was almost filled and this gave me 6 cups, so I assumed that the capacity was 6 cups so I would just have to half the recipe. The only thing is, my fellow Cake Slice Members said that the recipe produced a lot of batter and I would need thee, maybe even four!, loaf pans. So I went with my gut, and divided the recipe by three, better to have a little smaller cake than a tin that’s overflowing with batter. Well after I poured the batter into the pan, I realized I probably could have gone with the half of the recipe, but that’s ok because this was a perfect little pound cake.


This was such a silky smooth batter. I could have eaten the entire batter, uncooked. 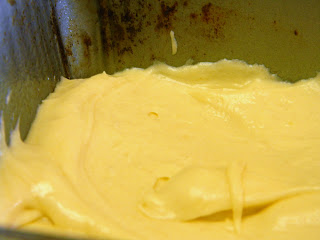 I had a little mishap with the cake being stuck to the bottom, but it was easily repairable. Just make sure to flour the greased pan before pouring in the batter. 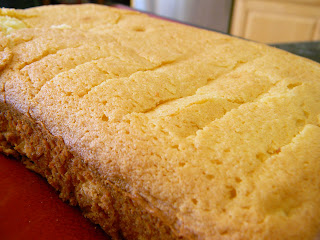 It was like a cloud on your tongue, so delicious! 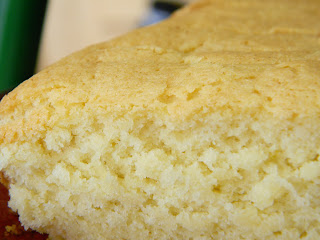 Directions
* To learn how to make your own cake flour go here.

Nothing to do for Once

I would like to apologize for the smallish hiatus I took. I’ve been so wrapped up in school stuff that I hardly don’t have time to bake! I would have made something last weekend, but I was at the Masters with my dad. It was actually pretty cool. I was pulling for McIlory and he was doing so great, but then nerves got the better of him on round 4. I felt so bad for him :(.


Now, back to school stuff. Today was the first day in a loooooong time where I didn’t have a single thing to do for homework or to study for some test. I was telling my friend today that I have absolutely no clue what to do with myself when I don’t have any homework because it’s such a big part of my high school life. Well the other day I saw on Joy the Baker’s blog that she had brown butter cookies and I’ve heard that brown butter can taste really good when it’s put into baked goods and I told myself I would make them this weekend. (If I had time that is.) So because I had nothing to do today, I made those cookies, but made a couple adaptations. I still have butterscotch chips left over from when I made the blondies way back when and I didn’t feel like going to the store to buy chocolate chunks and coconut, so I used the butterscotch chips, plus I also halved the recipe since I didn’t want to be baking for an hour!

The cookie ended up having a crusty exterior and a slightly soft interior. It’s a good cookie, but nothing to rave about. Joy's of course look like perfection, haha. Oh well, I'm glad I just had some time to actually bake something. Plus I had fun working with something I've never worked with before.


I like it better when dough isn't, well, dry. I got kind of frustrated when scooping the batter onto the sheet. 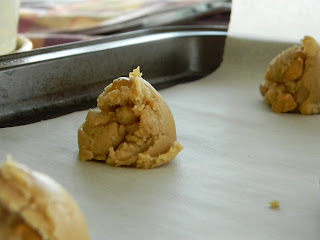 They do look pretty though, don't they? 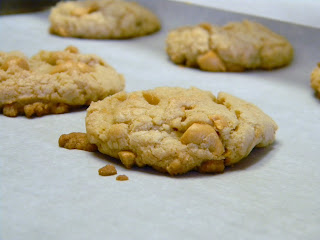 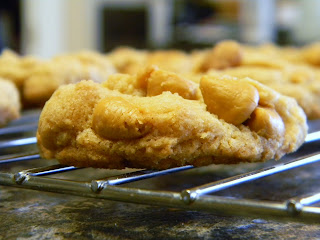