Ok, yes I over did it with the alliteration in the title, but alliteration is fun! Anyways, for those of you who smiled as soon as you read the name “Chris Colfer” and automatically thought of Glee, these cupcakes should make you smile even more. For those of you who are going “Eh? Who the heck is that?” I will tell you. Chris Colfer plays Kurt Hummel on a TV series called Glee, and today is Chris Colfer’s 21st birthday! Yay birthdays! (Hence the “Celebration” part of the title.)

My sister is so obsessed with this show, and Chris Colfer and his co-star Darren Criss (who happens to play Blain, Kurt’s boyfriend). I personally like the show as well and Chris/Kurt is in the top 3 characters that I adore on the show. My sister, on the other hand, basically has a panic/excitement attack whenever anything/one is in any way associated with the show or even if she sees a picture that reminds her of the show. She has even memorized Kurt’s wardrobe! Someone save me from the insanity (just kidding, I love my little sister).

Now, Chris Colfer seems like a real sweetie in real life and he is all cheery and just all around happy, and that is why I chose to make Angle Food cupcakes on honor of his birthday and him because he is so delicate, like an Angle Food Cake and his hair, oh my his hair. I am jealous of his lovely, dark, thick mane. That is why I chose the frosting that I did, which you will read about in like 30 seconds.

I found the cupcake recipe on Skinny Taste. I’ve made a couple of her recipes before and they aren’t too bad, so I decided to try one of her cake recipes. Well I had the idea of only making a couple of cupcakes because I didn’t want the typical dozen that most cupcake recipes yield, so I cut the recipe in half and after many conversions (because I don’t have cake flour I had to do some math to figure out how much corn starch to add to the flour) I finally got the recipe cut in half, only it wasn’t half. I still got 12 cupcakes! I know it doesn’t seem like a big deal, but it kinda is, because if these cupcakes only turned out to be so-so, then I would be stuck with 8 more cupcakes and I can’t give them to my neighbors because I’m sure one hates me for no other reason that I could think of except that I go to school with him. The other neighbor, I don’t really know and the other’s, heck I don’t even know their names! (Don’t move to the west, unless you really like your privacy and don’t mind not knowing your neighbors.) I decided to keep the cupcakes anyway and let them cool and then I made the most marvelous icing!

I am not usually a fan of frosting/icing because whenever I make it at home, it tastes like straight powdered sugar, no matter what I do to it and I just can’t take that. With that in mind, I decided to make a different kind of frosting; a toasted marshmallow frosting! I was a little hesitant about making it because it involved egg whites and then cooking them over simmering water, but I eventually got the hang of it and it turned into marvelous marshmallow topping. The only thing is that I didn’t get it to be as stiff as I would have liked, but that’s ok because the taste was so good it reminded me of s’mores and summer vacation (which I am now officially on). 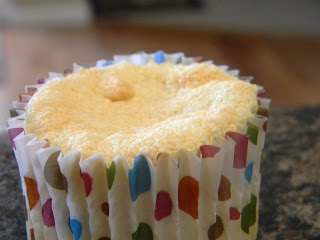 All around, the cake was ok next to the frosting. I don’t think I cooked the cake all the way through, but it was still pretty good, maybe if I had added a little more flavoring, the cake would stand out more. And I don’t need to tell you twice that the frosting is my new best friend and I love it.


Mmm, toasted little cake. I was actually stunned by the powers of the broiler! 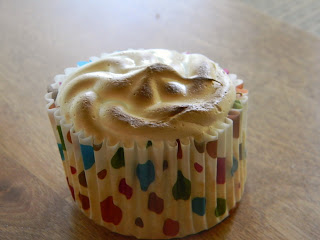 Close-up. I think this is one of the best pictures I've ever taken. 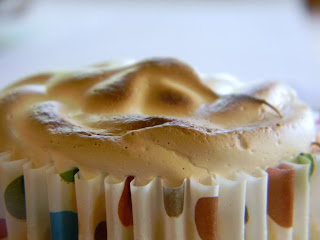 Time to unwrap the little gem and inside is a soft and fluffy cake, just waiting to be gobbled up by yours truely. 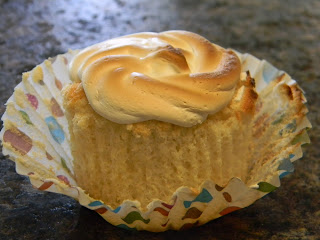 *Note: These cupcakes are best eaten the day they are made if you use the marshmallow meringue. The cupcake still tasted just as good as the day before, the meringue just doesn't taste as fresh and putting it in the micrwave doesn't do much help.


Marshmallow Meringue
recipe cut down from The Urban Baker

It’s the 20th again and that means Cake Slice Bakers will be posting all about this wonderfully moist cake from Cake Keeper Cakes by Laura Chattman. This months cake is called the Orange Almond Caramel Upside-down Cake, and it is delicious!

I didn’t want to make a full on cake this month because I felt that it would probably just sit on the counter forever. Thus, I make cupcakes. However, I didn’t want too many cupcakes, so I cut the recipe in half. By cutting the recipe in half, it gave me six cupcakes, and if you really, really try and squeeze out every last ounce of batter, you can get seven cupcakes. This, I think, is the perfect amount because after one night, there were only four cupcakes left, which seems a little less daunting to consume than nine.

This cake is supposed to have a brown-sugary almond top once the cake in inverted. Now, I kinda knew that this might not work with the cupcake, but I decided the try it anyway and put the topping on the bottom and I planned to take the cupcake liner off and turn it upside-down. Let me save you the trouble if you plan on making this in the form of cupcakes, put the topping on top of the cake, not on the bottom. I got a little bit of topping, but not much and I tried to scrape it off of the liner and onto the cake, but it just didn’t work. Oh well, we learn from our mistakes. Now, I’m just making this sound like a too complicated cake; it’s really not very difficult at all and the end result is a very tender and moist and just all around awesome cake!

I’ve never made cake with sour cream before because as a food, I don’t like sour cream. However, I will never snub my nose at a sour cream cake ever again because I now know the magical powers it possesses; it makes cakes super duper moist without the cake being kinda liquidy (has anyone had that experience where the cake is really moist {albeit it still tastes good} but it’s kinda wet it’s so moist?). This cake is so soft I’m pretty sure that I could replace it with my pillow. Ok, maybe I’m exaggerating just a tad bit, but seriously, this is good stuff. The only thing I wish I had done was add the orange zest (I didn’t have an orange and didn’t want to go to the store). It would have definitely amped (ampt?) the orangey flavor of the cake because the orange juice alone was not enough for me.


I was afraid these hadn't cooked all the way because they seemed so springy when they came out of the oven. However, 15 minutes and 30 seconds was deffinately the right amount of time for these beauties. 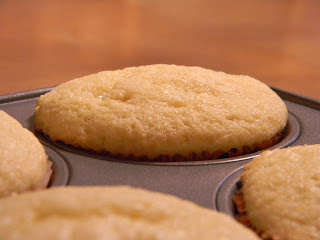 As you can see, the topping really didn't stick to the cake; it stuck more to the liner. It still tasted very nice though! 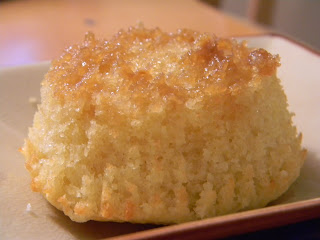 Sorry I haven’t been posting recently. My cousin’s wedding was last weekend and my family and I flew down to South Carolina for that and I just didn’t have time to bake anything. I’ve noticed that whenever there is some kind of holiday, I make all of these plans to bake marvelous things and then events pop-up and I don’t have time to make them. Oh well. The wedding was very beautiful and fun. However, there has been a lot of rain down in South Carolina and on the wedding day it rained and rained and rained; it didn’t seem like it would stop. However, the sun magically came out and all of the rain dried up in a matter of hours, which was a relief. Coincidentally, it has been doing nothing but rain every single day here in Colorado. Yes, I love the rain dearly, but for the past 5 days, nothing but drain drops (raindrops are fallin’ on my head…). And yesterday was my first day working at Elitches (Six Flags for the people on the east coast) and that was not fun at all. So, in order to make myself feel better about the bad day of working in the rain and cold, I made chocolate chip cookies.

I have not made regular chocolate chip cookies in what feels like a million years, and it’s sad, because I love chocolate chip cookies. The only, thing though, is that I can’t find the perfect recipe for me yet. I’m wondering if such a recipe exists. Well, I searched for chewy chocolate chip cookies on Google (the thin and crisp chocolate chip cookies are a big no no in my book). I came across three different cookie recipes that looked really good, but one was for jumbo cookies and I didn’t feel like having to guess at how many that made. The third cookie recipe was a gluten free cookie and I’ve always wanted to try and make something gluten free. I almost made these, but when push came to shove, I felt too lazy to try and find some kind of x-something- gum and buying three types of different flours. So that left me with the middle choice, and I’m not disappointed in the taste at all!

These cookies are terrifically soft and have just the right amount of chew. The person who I got the recipe from didn’t specify how many cookies it made so I automatically cut in in half because some recipes make like 5 dozen cookies and I’m not sure if I would want to be tempted by all of those. I did make the cookies using a small ice cream scoop, figuring they would spread a little, but they didn’t which is fine because if they had spread I don’t think the chew factor would be right. However, next time I make these cookies, I’ll probably use a little bigger portion scoop, but so I can get a slightly bigger cookie, but for now I am very content with my little cookies.


Yummy, yummy, soft dough! I would not mind eating this entire bowl just as it is. 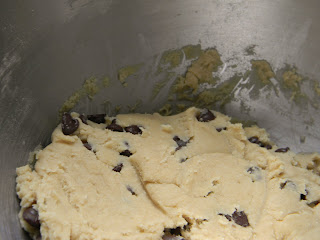 
I also swirved from my usual Nestle Toll House chocolate chips and splurged for some Ghirardelli semi-sweet. Best decission I ever made! :) 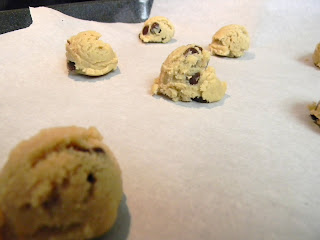 These little things are so great to eat and so easy to pop in your mouth. 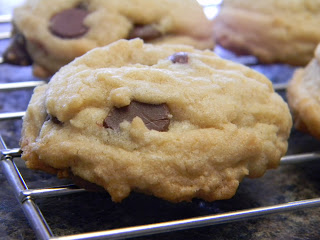