I have been a bad girl lately. Well, not really bad per say, but I’ve been sort of lazy and have neglected Cake Slice Bakers. I’ve only missed a month, but it feels so much longer. For the month of December the Cake Slice Bakers made Buche de Noel. I knew as soon as I saw the recipe was winning that I would not be able to make it. For one I had to study for finals that month, and two I would be leaving for vacation and I didn’t want to make a huge cake. 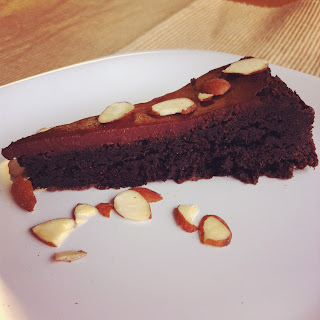 This month I actually sorta kinda participated in January’s recipe. This month we were supposed to make a Tiramisu Cake, but since I don’t like coffee, my sister doesn’t like coffee, my mom is away on business and my dad has been watching what he’s been eating, I knew that cake would never have a bite taken out of it. So instead of making the winning cake, I made the cake that I voted for: the Chocolate Almond-Coconut Cake.


This cake is similar to a flourless cake. Similar because it has 2 tbsp of flour and it uses egg yolks as well as egg whites. The cake is basically supposed to be an Almond Joy candy bar…but in cake form. I’ve tried Almond Joy before, and I do not like it one bit. The coconut is way too sweet and the almond on top just throws everything off in my opinion. So if I don’t like Almond Joy, why vote for an Almond Joy cake? Well I love the flavor of almond and I love chocolate, plus I could omit the coconut called for in the recipe, which is exactly what I did. 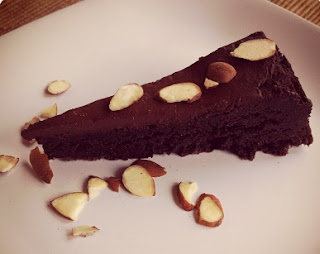 Along with omitting the coconut, I also took out an egg yolk, reduced the amount of butter by half a stick and only used 8 oz of almond paste instead of 12 oz (because I’m cheap and didn’t want to buy two cans when I would only use one and a half). The end result was marvelous! The flavor was so almondy, I couldn’t imagine adding in that extra 4 oz of almond paste. The cake was also really dense and was just so perfect. The chocolate ganache/glaze thing that went on top also added a nice little flavor of chocolate because I couldn’t really taste it in the cake itself.


Sadly, I was the only person that ate this cake…and sadly I could only eat a few slices (there comes a point in time when eating cake night after night become redundant and you want something else for dessert). This really is a good cake if you like/love the flavor of almond. 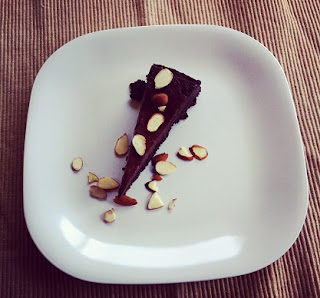 Side note: I really like the smell of almond. I like it so much, my dad got me almond lotion for Christmas. It’s awesome and I use it every day!

Ingredients
3 oz bittersweet chocolate, chopped
1/3 cup half and half

Directions
Posted by Unknown at 5:49 AM