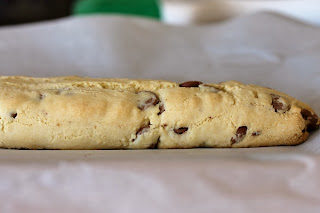 I have been in a sort of baking funk.

The problem is not that I haven’t had the motivation to bake something. The problem is choosing what to bake! I find myself drooling over so many pictures on Foodgawker and favoriting anything that looks good. (I think I’m up to five pages full of deliciousness).

Last week I told you about the snow day that I had and how I made fluffernutter fudge for the Super Bowl. But as I was making them, I knew I wanted something to munch on at home, but what? I could make muffins; muffins are very delicious and I haven’t had one is so long! I could try and make granola bars again (I had previously made some that didn’t make it to the blog), but I wasn’t in the mood for experimenting. I could make more doughnuts, but those would be gone by noon, I wanted something that would last a few days. 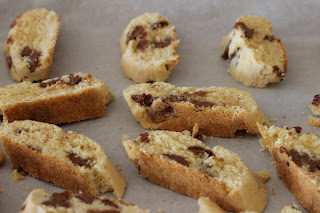 I hit the random button on foodgawker more times than I care to remember, looking for inspiration. When I didn’t find any there, I went to the bottom of my bookshelf, home to multiple dessert and snack cookbooks and magazines. Then I saw one lonely little book, no thicker than a quarter of an inch. My biscotti book! I had snagged it for around $2 when Boarders was going out of business. Since I bought the book, I had yet to make anything from it, and I thought this would be a nice opportunity to try one of the recipes out. Plus biscotti lasts for several days, so that means multiple days of crunchy-cookie-munching. 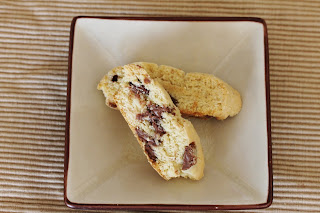 So you may wonder why I’m so glad about a crunchy cookie, when I’ve made it clear before that I’m a soft and chewy cookie gal. Well there is an exception to every rule and biscotti is that exception.

The biscotti turned out fantastic! I think I may have under-baked it during round one because it sort of fell apart on me as I was cutting it, but that doesn’t matter because after the second bake, these cookies became crisp perfection. The actual cookie part was crumbly and perfect for soaking up milk (or the traditional coffee for you coffee lovers out there). The milk chocolate chips gave way and melted during the two baking periods, creating a smooth texture with a pleasant creamy taste. 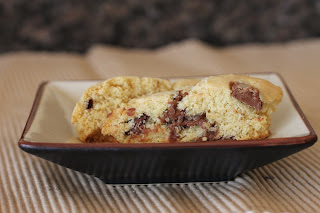