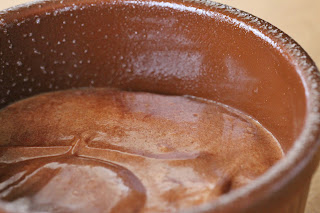 I’m sure everyone who has ever heard of a Chocolate Molten Lava Cake has had it at least once in their live. The classic dessert is so ubiquitous that I’m pretty sure every restaurant has its own version.

I remember the very first Molten Lava cake I had was at Starbucks. We had just moved to Colorado, so I was probably around 8 or so, and my dad and I were out shopping. We ended up in a nearby Starbucks and staring at me through the little glass display was the darkest Chocolate Cake I had ever seen. And it has this beautiful like drizzle of (what I now assume is) white chocolate. I asked my dad if I could get it. I don’t remember the actual ordering part, but I remember sitting at the table with my dad across from me and just plunging my fork into the decadent little cake. A pool of the most perfect pool of lava spilled out from the center and I remember being so happy that whenever my dad and I passed a Starbucks I asked him if we could go so I could get this lava cake. One day I asked the lady behind the counter if she had any more of the chocolate cakes, and she responded with a no. They had stopped selling those marvelous chocolate cakes. I am definitely not a coffee drinker and I haven’t had anything from Starbucks in years, but if they brought back those chocolate cakes, I’m pretty sure that I would stop by a lot more often. 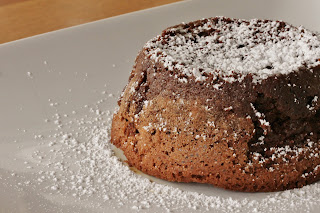 So, because of my love for all things gooey, chewy, and chocolatey, I was super excited to make this month’s cake for the Cake Slice Bakers. Yes, this month’s cake is the Individual Warm Chocolate Cake found on page 198 of The Cake Book.

I halved the recipe (no need to have 6 cakes for a family of four) and divided the batter between 4 ramekins (each ramekin getting two scoops plus a little extra of batter). I personally think this was the perfect portion size because these cakes will grow on account of the egg whites.

Speaking of egg whites, I have never successfully beaten eggs whites/folded them into things until this recipe. I’m not sure what it was, but everything came out perfectly when it came to the egg whites. You should have seen me beaming and dancing around the kitchen, showing off my little egg white peaks and folding abilities. 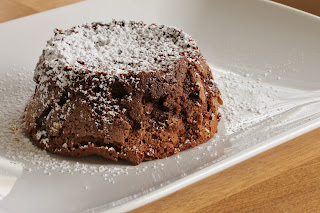 Anyways… I baked one cake in the afternoon (for picture taking purposes) and nestled the other three into the fridge for later use. These would be my little experiments since I wasn’t sure how the egg whites would hold up in the fridge for 8 hours. The first cake I baked, I have to admit I was a little nervous and baked it just a tad too long. There was no molten chocolate lava gushing from the center as I cut into it with my fork, but that’s ok. It was very soft and after I was done taking pictures, I put it in the microwave for a few seconds and it was so soft and chocolately. There was a slight crust too, which added some much loved texture and crunch.

Then at around 8 o’clock I turned on the oven and took the other three cakes out of the fridge to come a little closer to room temperature. This time I baked the cakes for a shorter time (even shorter than the time called for). These ones came out perfectly. Although these cakes are not the kinds out will find in restaurants with the four walls of actual cake and then a gooey hot mess in the center, these were very tasty and very gooey.

So far, this is my favorite cake that we have baked out of this book. It is absolutely amazing. 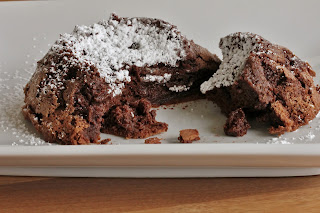