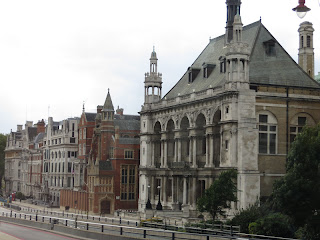 View from top of the double decker bus

Today was another lazyish day, but not as lazy as the day before. My mom and I decided to take the Open Bus Tour (you know those double decker buses that take you around to see all the sites?) and see what there was too see. The main goal was to get to Harrods. But that is later in the day.

After traveling on the double decker bus for about an hour, we got off around South Kingston for lunch. I had told my mom that I wanted to go down that street because there was a little place I wanted to eat lunch. Little did she know that I just wanted a cupcake from Hummingbird Bakery for lunch, so she complied. When my mom figured it out, she was kind of... I don’t know, not mad, but probably not happy with me either, but she let me have my cupcake. 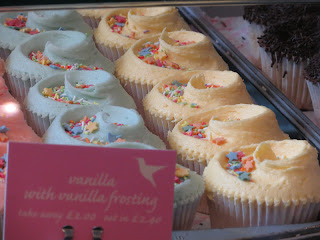 I’m not sure if you’ve heard of Hummingbird Bakery, and I’m not sure how I came across the name, but I think it’s supposed to be a well-known bakery in England. Anyways, I wanted to try it out. The bakery in South Kingston is so cute and there is a little pink hummingbird painted on a wooden sign just outside the door. The inside of the bakery is marvelous! There are rows upon rows of colorful frostings on top of little cute cupcakes. And then there are brownies and cookies lining the shelves. I was almost tempted to try one of their brownies, but I had come for cupcakes. 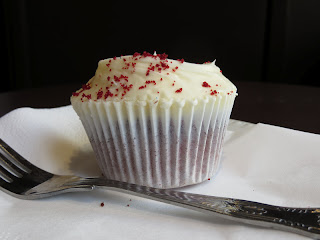 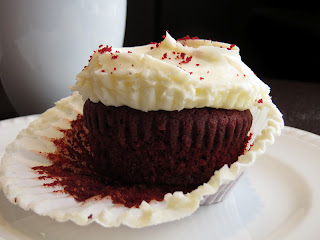 After taking a few minutes to ponder over the delicious looking flavors I chose the Red Velvet, seeing as I don’t remember ever tasting red velvet anything! After paying for my cupcake (my mom wanted an actual lunch) –side note- here’s something non-Englanders probably don’t know: If you chose to eat in someplace, like a bakery or café, the price of what you order is higher than the price you would pay if you took your order to go? Ok side note over; like I was saying once the cupcake way paid for, my mom and I sat down at one of the little tables. First I tried the frosting, which was really creamy and soft. It wasn’t the best cream cheese frosting I’ve ever had, but it certainly was tasty. Next came the most exciting part, the cake! To be honest, I wasn’t too thrilled about the cake part. It didn’t really taste like anything. It just tasted like, well, cake. There was nothing really special about it, sadly. 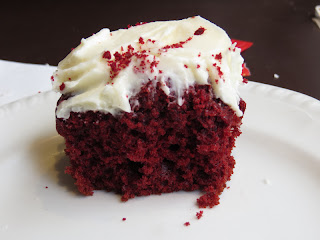 Even though the cake was a little bland, that didn't stop me from eating it 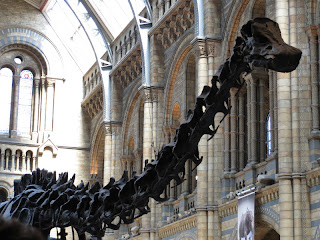 A Diplodocus greets you at the entrance

After the cupcake had been consumed and my mom got some “real” lunch at a little French café just down the street, we walked over to the Natural History Museum. Have I told you I love museums? Well I do! They are so much fun, especially the dino exhibits! And this dino exhibit has got to be my favorite of all time! It had so many facts I didn’t know like how crocodiles and birds both see in color! If you’re ever in London, definitely see this exhibit in the Natural History Museum.  I also so the stuffed mammals exhibit, which was also really nice (I found Pumba!) and I saw some skulls and skeletons of mammoths. Those things were ginormous! 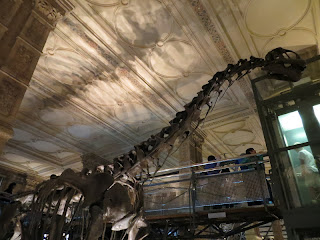 Camarasaurus (Kam-are-ah-sore-us): This stocky and powerfully built plant-eater is a relative of the much slimmer Diplodocus in the Central Hall of the museum. Camarasaurus had pillar-like legs and a huge backbone to support its 25 ton body 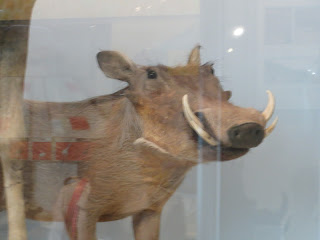 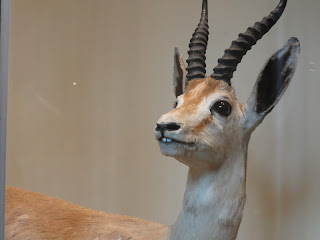 Dorcas Gazelle: This is a male. Females have much smaller horns. They live in deserts from Morocco and Pakistan Food: shoots, leaves, grasses, roots; Social Grouping: alone or in small groups; Natural Predators: lions, jackals, hyenas, cheetahs; Conservation Status: endangered in some areas of its range 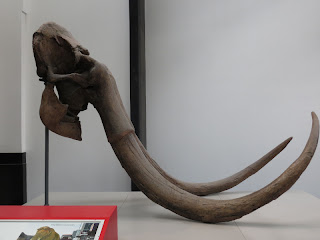 When we were done wandering around the exhibits, my mom and I caught the Open Bus Tour one more time so we could finally go to Harrods. When I was in New York City for New Years I went to Bloomingdale's, and I kind of expected Harrods to be kind of like that. Well, Harrods is nothing like Bloomingdale's; it’s so much… MORE! The main reason we went to Harrods was to see the food part of the mall. The food section (on the first floor) was incredible! You walk in and you’re immediately greeted with sweet little cupcakes on the left, and a Japanese restaurant on your right and the food just goes on forever! I ended up buying a chocolate-hazelnut scone (Perfect butter taste with a little sweetness from the giant chunks of chocolate; this one was really nice.) and a plain scone (Also buttery and very pleasant. Each scone had perfect crust and soft and delicious insides). The basement floor is dedicated to Princess Diana and Doti. 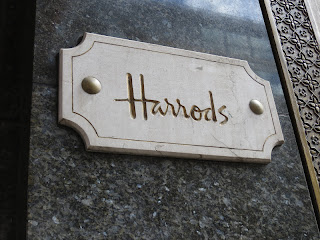 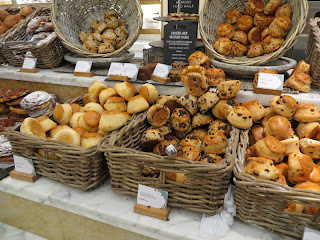 The chocolate-hazelnut scone are the ones in the middle; the plain scones or to the left 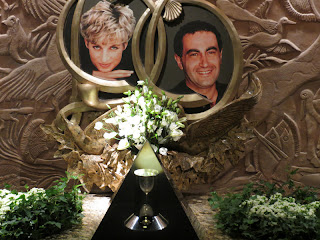 As we left Harrods (which felt like being in an amusement park; it was so crowded and there were so many shiny things to pay attention to, it was crazy!) I noticed a sign for a Jack the Ripper tour. Now I love the history of Jack the Ripper. In the AP Lang. class junior year we were supposed to compare and contrast two things. I compared Jack the Ripper to Ted Bundy. I’m pretty sure my teacher thought I was morbid, because the year before I had written an essay for my advanced world lit. class I wrote an essay on the Salem witch trials. My two teachers are best friends and I’m pretty sure they compared notes on me *snicker*. Anyways, I saw that the tour started at 15:30 and since I’m not used to military time, I assumed that meant 5:30. Turns out we had missed the tour by 2 hours. It was sort of disappointing, but it wasn’t such a big deal. Instead we took a walk through a fair that was going on. It turns out that July 1st is Canada Day! It was fun just walking among the throngs of proud Canadians. I even saw some invisible people! 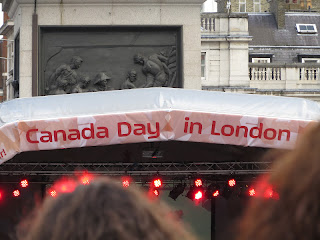 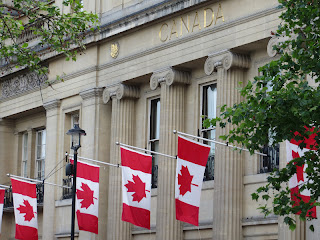 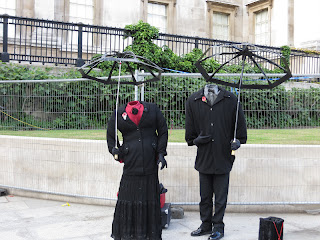