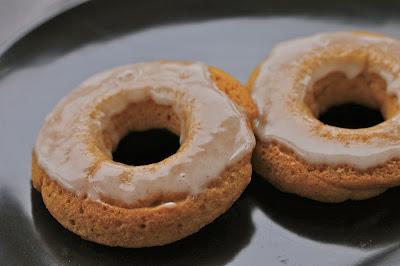 It’s definitely starting to get cooler here. Every morning when I go to my car I see the windows are covered in condensation and when I drive I’m surrounded by fog. It kind of makes me feel like I’m in a horror movie. It’s kind of cool, yet kind of creepy in the same way. It’s cool because Halloween is just around the corner, but creepy because all I see on the roads are two little beams of light in a swirl of mist.

On a completely different note, I made donuts. Or is it doughnuts. I still can’t tell the difference. Maybe doughnuts are used for the fried variety because it’s actually dough. Yeah, I like that idea. These donuts (notice the spelling) are made in the super special donut pan that everyone and their mother now has, or at least it seems that way.

Like I said last week, I am on pumpkin mode right now. I can’t help but want to save, pin, mark, jot down everything that has to do with pumpkin. It is just an amazing flavor, especially when paired with all the good spices like cinnamon and nutmeg. 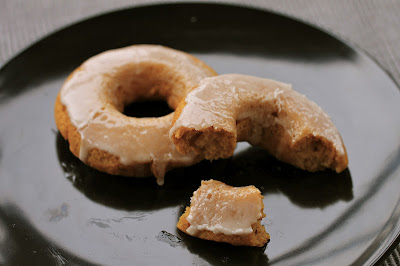 I got this recipe from the lovely Erin of Texanerin Baking. I’ve made one of her lovely treats on the blog already, and it was pretty dern good. These donuts are no exception. They are so soft and tender, like cake…only better. Say what? I don’t know. It’s funny how the same ingredients can yield totally different things. It amazes me every day!

Ok so back to pumpkin donuts. Like I said these are so soft and tender and the pumpkin shines enough to make your belly full of fall happiness. I also added a cinnamon glaze on top to give it a little extra cinnamon kick. The glaze I made isn’t too sweet and pairs perfectly with the warm flavors of this donut. 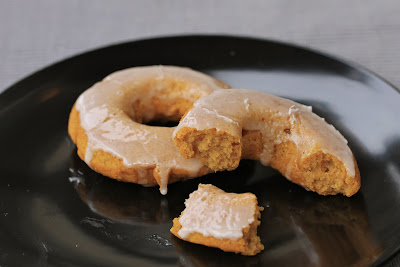 Directions
Preheat the oven to 350 F. Spray a 6 count donut pan with cooking spray; set aside.

Scrape batter into a piping bag (or do what I do and use a ziplock bag). *Helpful tip: place your piping bag/ziplock bag in a glass cup. Fold the tips over the cup for easy, mess-free sealing. Snip off the tip of your bag and pipe enough batter into the molds to fill between 1/3 and ½ full. Bake for 10-12 minutes or until a toothpick comes out clean when inserted into the donut.

Allow the donuts to cool in the pan for a few minutes before inverting them onto a cooling rack. If you have trouble getting the donuts to come out, run a toothpick around the sides of the outer circle and the inner circle. I feel the toothpick is better than a knife when it comes to the donut pan.

While you wait for the donuts to cool make the glaze. Combine ½ cup of confectioners’ sugar, a dash of cinnamon, ¼ tsp. pure vanilla extract and 2 or 3 tsp. of milk. Dip the tops of each donut into the glaze. Allow to dry for a few minutes, then go in for a second dipping to ensure a nice glaze.
Posted by Unknown at 12:02 PM