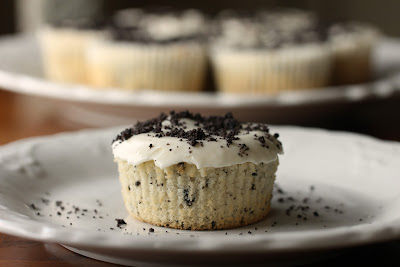 Hi. I haven't updated this blog in a while, but again I will put all the blame on school. I don't want to be a Debby Downer so I'll just leave it at that.

I made these cupcakes for the first time in mid-December. I was with my cousin and she wanted me to bake her something, so I texted her a few pictures so she could decide what she wanted.

My cousin, along with my aunt and basically her entire family, so not cook, like at all. I had to keep asking my cousin if she had measuring cups and spoons and if she had sugar and eggs. She had no idea about anything, so not only did we end up buying every single ingredient called for in the recipe, but a few of the measuring essentials too. 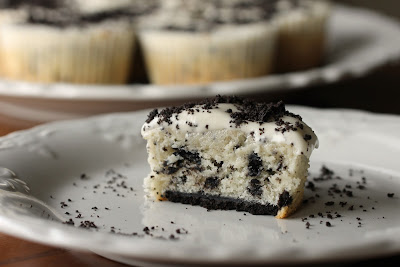 As I was making these cupcakes my cousin just kept looking on in astonishment. I felt kind of bad since she’s all like “Why do you have to do that?” and “Why can’t I just use the glass thing to measure the flour?” It was kind of bad, so I got her to crush the Oreos and so a little of the folding too. By the way, my cousin in six months older than I am, so if I’m portraying her as a little kid, I’m not. It shocks me every time I make something so simple and my aunt and her family are beyond impressed.

Anyways, these are some freaking fantastic cupcakes. I decided to make them again for my roommates to try and one roommate accused me of putting crack in them because she kept going back for more.

The cake part is really delicate, until you bit into the Oreo base and get a good chunk of Oreo in the bite, then these are just heavenly. The only part I kept having trouble with is the frosting. It’s dang good frosting, but it’s so…loose! The pictures make it look like this is an Oreo cheesecake, but it’s not. Besides the frosting being so limp, it’s great and soft and delicious. 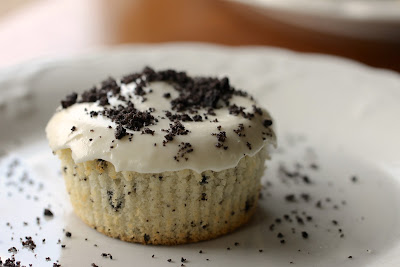 Directions
Preheat the oven to 350 F. Line a cupcake/muffin tin with paper liners. Twist the 4 Oreos so you have 8 cookies in total. Place one Oreo cookie, cream side up, in the paper liner.

In a medium bowl, whisk together the flour, baking powder, and salt. Set the bowl aside.

In a large bowl, cream the butter and sugar together until fluffy. Beat in the egg white. Mix on medium speed until foamy and voluminous. Stir in the vanilla. Mix in half of the dry ingredients until combined. Add all of the buttermilk and mix until fully incorporated. Stir in the rest of the dry ingredients. Scrape down the sides of the bowl as necessary. Fold in chopped Oreos.

Distribute batter among the prepared liners. Bake cupcakes for 15-18 minutes or until a toothpick comes out clean when inserted in the middle. Allow cupcakes to cool in the pan for 5-10 minutes before removing to a wire rack to cool completely.

As the cupcakes cool, make the frosting. Beat the cream cheese and butter in a medium bowl on medium speed until smooth. Blend in vanilla. Slow the speed down and gradually add the powdered sugar. Make sure to scrape down the sides of the bowl as necessary. Increase the speed and whip for 4 minutes. Frost cupcakes as desired (remember, the frosting will be really goopy). Sprinkle tops with Oreo cookie crumbs.
Posted by Unknown at 8:01 AM