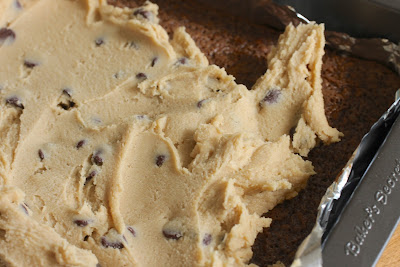 I have been posting a lot of cake recipes lately. Lets change that.

Today I bring you two delicious desserts combined into one! I saw this recipe on Foodgawker and saved it because it really is an ingenious idea. Cookie dough is soft and brown sugary and make people happy. Brownies (the good ones) are dense, fudgy, and full of chocolate! Combining these two things really does make an awesome dessert.

I was actually kind of nervous when making these because I didn’t read the comments for tips on how to improve until I was getting all the ingredients together. Then I started to get nervous when I kept reading all these comments about how the cookie dough topping was crumbly and how the brownie bottom was dry. Despite this, I decided to make them anyways and hope for the best. 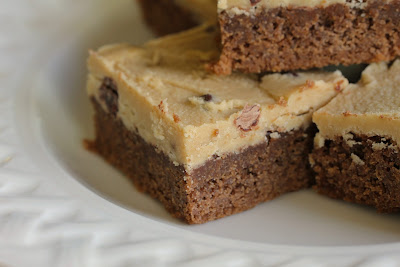 Michelle, from Brown Eyed Baker, used the creaming method for her brownie base, but I decided to switch it up a bit and use the original recipe of melting the butter and whisking it with the brown sugar. The cookie dough part was hardly changed at all (just the addition of salt) and it was not crumbly at all! This eggless cookie dough has the perfect regular chocolate chip cookie dough consistency, and this is coming from a girl who is back to baking in the dry, high-altitude of Colorado. I don’t know what those crazy people where doing. 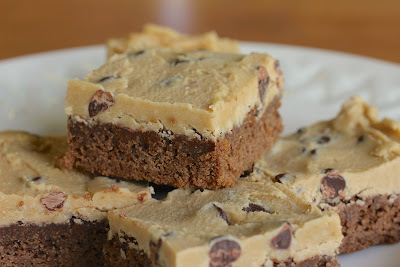 Directions
To make the brownie base: preheat the oven to 350 F. Line an 8-inch square baking pan with tin foil. Grease foil with cooking spray and set aside.

In a heat-proof bowl set over simmering water, add the chopped semi sweet chocolate. Stir occasionally until completely melted. Turn off the heat and set the bowl of melted chocolate aside to cool.

In a medium bowl whisk together the melted butter and brown sugar until combined and the mixture looks creamy. Whisk in the eggs, one at a time, adding the second once the first has been incorporated. Stir in the vanilla extract and the melted chocolate. Fold in the flour and salt until just combined. The mixture will be very liquidy.

Pour the batter into the prepared pan and bake for 18-22 minutes or until a toothpick comes out almost clean when inserted in the center. Do not remove the brownie from the pan; allow it to cool while you make the cookie dough topping.

To make the cookie dough topping: in the bowl of an electric mixer fitted with the paddle attachment, beat the butter on medium speed until creamy. Gradually add both sugars to the beaten butter. Cream the ingredients until light and fluffy. Scrape down the bowl as necessary. Add the milk and vanilla and beat on medium until combined. Turn the mixer speed down to low and gradually add the flour and salt. Mix until flour is just incorporated. Turn the mixer off and fold in the chocolate chips.

To assemble: Spread the cookie dough over the just warm brownie (still in the pan). Make sure to spread the dough evenly to the corners of the pan. Place plastic wrap over the dough and freeze until the dough has become firm. Remove cookie dough brownie from the pan and cut into desired portions. Allow the brownie to come to room temperature before serving.