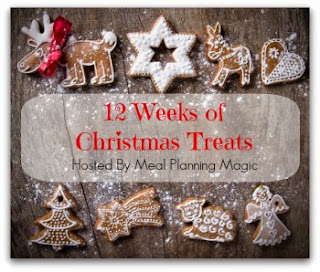 I am honestly starting to believe that time goes through a black hole and is never to be seen again. That is the only explanation as to why it seems like no time has passed and yet it’s already mid-November.

I absolutely love the holidays and all holiday food. But I have a strict flavor calendar. Like pumpkin in the months of October and November only and maple in late November and all of December. Gingerbread flavors are strictly for December only.

So because it is still November I’m going to post another pumpkin recipe. I hope to get a few more in before the end of the month. 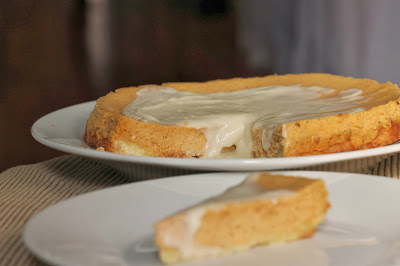 Now I know I just said pumpkin is should stay within the October/November time frame, but some people are cooky and like eating pumpkin in December as well, which is why I’m including this pumpkin cheesecake for the Christmas Treats blog hop.

Now these were supposed to be bars, but I liked the idea of turning this cheesecake-pie combo into a circle because I have a spring form pan and that would make getting the cheesecake out so much easier.

I don’t have many recipes for cheesecake because it’s not really something I think about often or order when I’m at a restaurant. However, every time I do make cheesecake I wonder why I don’t make it more often. Quite frankly I can’t think of a good reason not to make cheesecake. 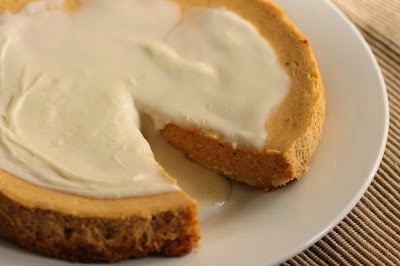 The filling is oh so creamy and soft and just mmmmmm. And the pumpkin shines through just enough. I have no complaints about the filling at all. If this was cooked by itself I would eat the entire thing with a fork.

The crust was a nice surprise. Most cheesecakes ask for a cookie/graham cracker crust, but this one is more of a pie crust, which I loved. I suck at making pie crusts and they never taste any good. But this one was yummy, yummy in my tummy.

The only complaint about this recipe was the cream cheese frosting. That thing liquefied so easily and I don’t understand what happened! It set up perfectly in the bowl, but as soon as I put it on the cheesecake it just became liquid. But don’t let that deter you from making this luscious dessert! 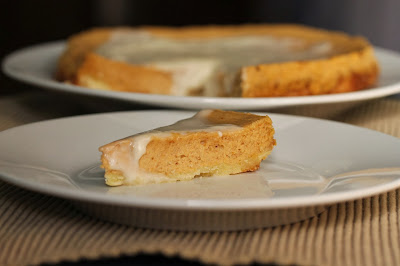 Directions
Line the bottom and sides of an 8-inch round spring form pan with tin foil.

For the crust: place flour, sugar, and salt in a medium bowl. Rub the butter in with the tips of your fingers until the mixture resembles coarse sand. Mix in the egg yolk until the dough starts to come together. Pat the dough into a uniform disk and cover with plastic wrap. Refrigerate dough for about 30 minutes. Roll out dough between two sheets of parchment paper. Press the dough into the bottom of the prepared pan. Chill for 30 minutes.

Dock the top of the crust with a fork and cover with tin foil. Bake for about 10 minutes. Take off the tin foil and bake for another 10 minutes. Allow the crust to cool as you make the filling.

Turn oven temperature down to 300 F.

For filling: beat the cream cheese in a large bowl until smooth. Add the sugar and beat until completely combined. In a medium bowl, whisk together the pumpkin, syrup, vanilla, salt, cinnamon, nutmeg, and ginger. Pour mixture into the bowl with the cream cheese and sugar. Mix everything together until combined. Scrape down the sides of the bowl as necessary. Whisk in egg.

Pour filling into the prepared crust and bake for about 20 minutes or until the edges are set and the center jiggles slightly. Refrigerate for 2 hours.

For the frosting: beat together the cream cheese and the butter until fluffy. Gradually beat in the powdered sugar. Stir in the vanilla and salt. Mix until smooth. Spread frosting over chilled cheesecake. Chill in the fridge for 30 minutes before serving.