First, I would like to say that I have never made meringue before, but something in my wanted to try it out; to see if I could do it. The answer? Kind of, sort of. Maybe I didn’t wait for the egg whites to get as stiff as they could be (I thought they were pretty stiff when I started) or maybe it was because I added the vanilla and peppermint extracts while I was folding in the sugar mixture that made the egg whites deflate a little (probably the later). Or maybe, the eggs whites are supposed to be a little runny when you put them into the piping bag or maybe it was the kind of bag that I used. Either way, the eggs white deflated a little, but I don’t care because they taste pretty darn good to me and I congratulate myself on trying something new! :)

By the way I first saw these on  Shauna's Piece of Cake blog, if you want to see what they are supposed to turn out like, go see her blog :).


This is probably where I messed up 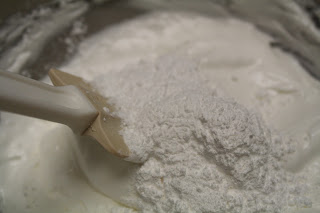 Looks so shiny, I sent so unbelieveable slow, but maybe I
was just too agressive. 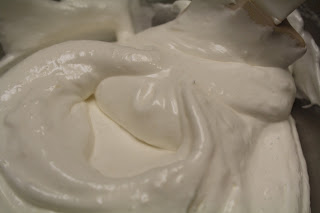 I do wish I could taste the peppermint flavoring more,
though. 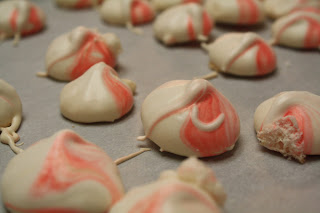 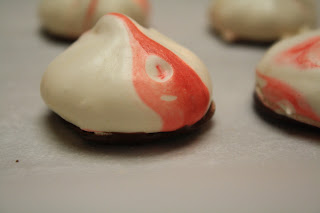 Chocolate-Dipped Peppermint Meringues
I have no clue how many it made. I was just making
random dots until the batter turned to goop