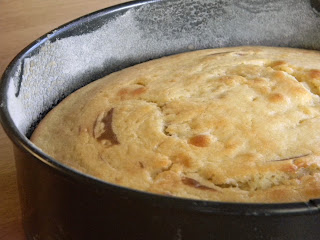 Are zebras white with black stripes, or black with white stripes? To be honest, I don’t know. To me, the concept seems weird of white stripes, black stripes just seems more…normal? I don’t know. If you’re wondering why I’m talking about zebras, it’s because for the month of July Cake Slice Bakers voted on the Zebra Cake from our book, Cake Keeper Cakes.

There was no picture, so I think some of us were worried on how this cake would turn out, or maybe I’m just speaking for myself.

It has been so long since I’ve made a full on round cake. I usually turn things into cupcakes for portion control or cut the recipe in half. However, because of the intricate design of this cake, I thought it would be best to keep it as a round cake.

But just because I decided to keep the traditional shape, doesn’t mean I didn’t do a few tweaks. You see, the original recipe called for both butter and vegetable oil and I don’t remember liking vegetable oil in my cakes, so I nixed the oil, but kept the amount of butter the same. The second major thing was the baking powder. Good Lord did this recipe call for a lot of baking powder; one tablespoon to be exact. Yeah, that really scared me, so I lowered that to two teaspoons.

The batter was kind of gloopy, but I expected that because I did not use the oil. The gloopyness made it a little hard for the batter to spread, but I made it spread using my forceful ways, mmwahaha.

When I cut into the cake, I was a little nervous because I was afraid that all of the jostling I did to the batter mixed us the chocolate and vanilla batters, but no. The cake turned out to look like a zebra, which was pretty cool. The final product was a very tall, dense, and moist cake. I’m not so sure about the flavor of the cake, I've had better. In the end, it was an ok cake. I can only speak for myself though because I’m sure the slight adjustments I made caused some sort of alteration in maybe the flavor or texture. To find out, visit the other bloggers and see how their zebra cakes turned out. 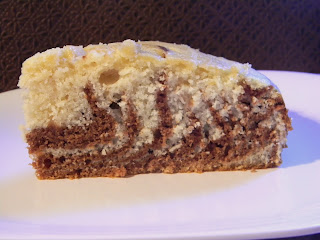 Fun fact: when zebras are in a cluster, their stripes create a dizzying effect on predators (such as lions) and therefore helps camouflage them because no one wants to mess with a giants black and white blob. 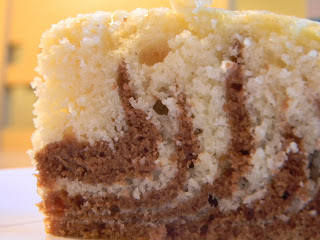