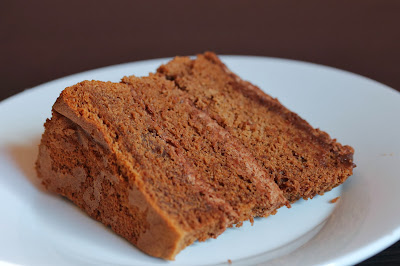 It’s October 20th (where did the time go?!) and you know what that means! Well if you re new here I’ll tell you, it means the lovely ladies from the Cake Slice Bakers are posting the 12th and final cake from the most wonderful cookbook ever: Vintage Cakes by Julie Richardson.

I don’t think we have ever had a more successful cake book than this one.

I can still taste this Red Velvet Cake we made back in February, my god it was so smooth and delectable, and this Honey Bee Cake was definitely a huge hit for my roommates and me. The honey syrup was so sticky and sweet and just paired perfectly with the cake. Oh and don’t get me started on the Lemon and Almond Streamliner Cake. That is probably my absolute favorite out of all the cakes we made this year. So lemony, tangy, yet sweet too. And the frosting for this cake was amazing! I could eat that out of a bowl with a spoon if my goal was to gain 10 pounds in an hour.

So it has been a tradition for the past couple of years that on the last cake everyone makes a cake of their choice and keeps it a secret from everyone (including the members of the group) until the big reveal.

I ended up making this lovely beauty!

You would think an all-chocolate cake would be really heavy and dense, but not this one. It has 7 egg whites to make it light and fluffy and the whipped cream frosting keeps the whole thing light and pleasant.

I took this to my parents during fall break and by the end of my long weekend (only 4 days mind you) all by this slice you see here was gone. I had to salvage it because I didn’t have time to take pictures.

My mom says this is the best cake I have ever made. I think it has to do with it tasting very similar to this cake my grandma who passed away a few years ago; it was a tough time for my mom. But I’m glad I unintentionally made a make my mom had in her childhood frequently. The only difference between the two cakes was that my grandma put a burnt sugar toffee thing on the top. I really do think that would make this cake extra awesome!

(By the way please excuse all the terrible photos. I didn't have proper light for about a week and since this was the last slice I didn't want to get rid of it so it looks a little mangled.) 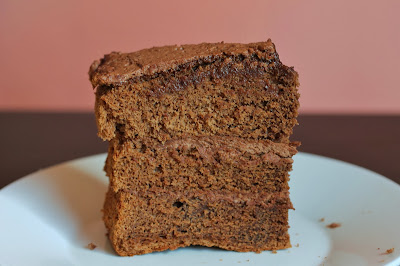 Directions
Whipped Cream: place chocolate in a heat-proof bowl. Heat the heavy cream in a saucepan over medium heat until it reaches a slight simmer. Take off the heat and pour over the chocolate, swirling the bowl to coat all of the chocolate in heavy cream. Let the mixture sit for a little bit to allow the chocolate to melt. Whisk the cream and chocolate until combined. Stir in the vanilla, cinnamon and salt. Cover with plastic wrap and chill in the fridge until cold, about 3 hours.

Preheat the oven to 325 F. Take out your 10-inch tube pan, do not grease or line the pan. Just get it out in preparation for the batter.

Cake: In a small bowl, whisk together the cocoa powder and boiling water until smooth. Whisk in the oil, buttermilk, vanilla, and yolks.

In a large mixing bowl, sift together the cake flour, baking powder, salt. Whisk in the brown sugar until the big lumps are gone. Stir the chocolate mixture into the flour mixture with a rubber spatula. Stir briskly until smooth. Do not over-mix.

Pour batter into the UNgreased tube pan. Place the pan on the lower third oven rack and bake for 45-55 minutes. Do not invert the cake, but place it on a cooling rack until it reaches room temperature. To unmold the cooled cake run a thin knife around the edges to release the sides. Invert the cake onto a serving plate.